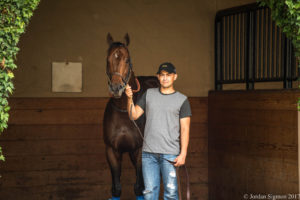 Saturday’s $300,000 Bing Crosby Stakes (GI) at Del Mar marks the second Breeders’ Cup Challenge “Win and You’re In” event of the summer meet and a field of 11 will race the six furlongs in search of a spot in the starting gate for the $1 million Breeders’ Cup Sprint (GI) on Nov. 3. Saturday’s feature also marks the return of last year’s winner, Drefong, making his first start since that race after suffering a series of minor injuries and setbacks.

The weather in Southern California continues to be beautiful and Saturday will be no exception, with highs in the mid-70s and a nice ocean breeze expected.

Named for the founder of the historic seaside track, the Bing Crosby has consistently showcased the best sprinters west of the Mississippi River and, over the years, some of the horses to have graced the winner’s circle have included several prominent names, including champion sprinters Chinook Pass, Lit de Justice, Kona Gold (twice) and Points Offthebench.

Baoma Racing’s Drefong is the slight favorite despite the lengthy absence and is a good candidate for Hall of Fame trainer Bob Baffert to pick up his fifth win in the summertime sprint. The 4-year-old son of Gio Ponti and a Ghostzapper mare, who should, by all accounts, be a turf marathoner, has always been an overachiever since his second start, winning every race by open lengths.

His speed is his weapon and, in each of his five career wins, his rider has been able to use it pretty much from the break and dominate his rivals at every call. He’s been back in… (more)