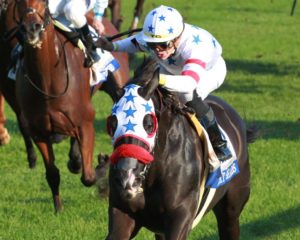 When Jerry McClanahan thinks back on his first experience as a thoroughbred owner more than 20 years ago, he sometimes wonders how he’s still in the game. An avid handicapper who dipped his toe into a claiming partnership on a low-level Los Alamitos mixed-breed specialist, his first horse almost didn’t even make it to the racetrack. Literally.

“Sometimes I can’t believe it,” McClanahan, who is the owner of the multi-state HVAC test and balance certification company Hartmanaire, said. “The very first horse I ever owned [a piece of] was entered in a claiming race at Los Alamitos and we had to trailer her down there ourselves. She was in the last race and on the way, the trailer broke down and it had to be towed — with the horse inside — to Los Al. She nearly didn’t make it, but she did and she won.”

Fast forward nearly two dozen years later, McClanahan sits in a position he refers to as a “dream come true” and also a canyon of difference away from that initial horse, as he is now a part-owner of not just one Breeders’ Cup runner, but three— all in his first year at the World Championships. All three horses — Mile contender Next Shares, Turf Sprint also-eligible Insta Erma and Juvenile Fillies Turf starter Lady Prancealot — are trained by McClanahan’s good friend, Richard Baltas.

And although his inaugural victory as an owner was in the lower claiming ranks all those years ago, McClanahan is no stranger to success at the stakes level. In 2003 he was part of a group that claimed a California-bred gelding named Excess Summer for $40,000, who Jeff Mullins then trained to win multiple stakes for earnings of more than $700,000. But never in his wildest dreams did he even then imagine any horse of his wearing the purple saddle towels synonymous with the Breeders’ Cup.

Next Shares, who he owns in partnership with Michael and Jules Iavarone, Christopher Dunn, William Marasa, Ritchie Robershaw and Mark Taylor, won the Old Friends Stakes at Kentucky Downs before posting the upset in the $1 million Shadwell Turf Mile (GIT) at Keeneland, which guaranteed him a spot in the gate for the Breeders’ Cup Mile (GIT). The 5-year-old son of Archarcharch was purchased by the group for $190,000 at Keeneland a year ago. 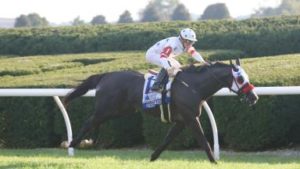 Irish-bred Lady Prancealot, who is also owned by Christopher Dunn and Jerry and Jeremy Peskoff, has a pair of seconds in North America since arriving from Europe over the Summer. Insta Erma, who was a $290,000 Fasig-Tipton Select Horses of Racing Age Sale purchase 18 months ago, won the Kentucky Downs Ladies Turf Stakes for McClanahan and partners Medallion Racing, Nathan McCauley, Thomas Cornelison and Christopher Johnson. All were selected by bloodstock agent David Meah.

“What a thrill,” McClanahan said of Next Shares’ Shadwell win. “I had won a Grade 1 before earlier in the year — my first one — in the Fantasy at Oaklawn (Sassy Sienna) and all the wins are special, but the Keeneland race was unbelievably exciting. It came after the win in the Old Friends race at Kentucky Downs, too, which I also thought was important because I will never have to worry about Next Shares and his future. The winner of the race is guaranteed a home at Old Friends and it’s such a great place, and means a lot to me to know he’ll always be safe there after he’s done racing.”

But first things first, the Breeders’ Cup. All of the horses McClanahan is a partner on will have their work cut out for them, but he says if they didn’t believe they all earned a right to be running, they’d not have been entered.

“The numbers say we belong, a lot of people say we belong,” McClanahan said. “They all definitely have their work cut out for them, but we would not be here if we didn’t believe they all deserved to try.

“I am so unbelievably grateful to have Richie Baltas and the team responsible for all of the horses, they are why we are here. Richie is a tremendous horseman and he’s also just aa great guy. David Meah selected this horse for us; he has a great eye and feel for horses and has bought a few for us. And David’s wife [Anna Meah] has recently gone out on her own as a trainer and also has one for us and will probably have more. Plus there’s [assistant] Aimee [Dollase], who has been with Next Shares all this time. The whole team, all of our horses are surrounded by good people.”

Overall, McClanahan said he owns all or part of 18 horses, including yearlings and broodmares, and while he will always remain optimistic about someday making it back to the Breeders’ Cup, his first will always stand out as most special.

“It’s like every experience in racing has led up to this,” McClanhan said. “From starting as a handicapper, to having the lower horses and now. From zero to 100 — from handicapper to winning four major races this year and now three in the Breeders’ Cup. I can’t believe it.”

For Tiago Pereira, The ‘Skye’ Isn’t His Limit