Accelerate Argues Case For Horse Of The Year With Classic Victory 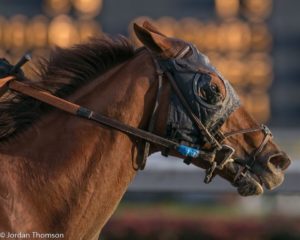 In a year with a rare Triple Crown winner, Hronis Racing’s Accelerate made his own case for Horse of the Year with a one-length victory in the 35th running of the $5,358,000 million Breeders’ Cup Classic (GI) at Churchill Downs. In doing so, the handsome son of Lookin’ at Lucky gave trainer John Sadler his very first win on Racing’s Championship Day from 44 previous starters and also an initial win for his owners, Kosta and Pete Hronis.

As the lukewarm favorite at more than 5-2 under jockey Joel Rosario, Accelerate paid $7.40, $6 and $4.40. Gunnevera, a 30-1 outsider in the field of 14, was worth $21.80 and $11.80. Thunder Snow checked in for third, three-quarters of a length behind the runner-up and was good for $8 at 14-1. Yoshida, Mendelssohn, Lone Sailor, West Coast, Discreet Lover, Axelrod, Pavel, Mind Your Biscuits, McKinzie, Catholic Boy and Roaring Lion rounded out the order of finish. 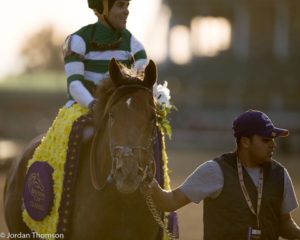 “I think he’s done something no one else has done, he swept the California grade 1s,” co-owner Kosta Hronis said. “He’s undefeated at the mile and a quarter. I think today, they’ve been saying all along that, he had to win the Classic to be in the conversation. He won the Classic, and then I read somewhere where it said maybe he did this all on the wrong year, but maybe Justify won the Triple Crown in the wrong year, I don’t know.

“This horse is special. He’s showed up every time. He’s danced every dance. He’s been solid. This is Horse of the Year. It’s a body of work, and what he has done in the last 12 months, I think he’s well deserved to be of that honor. There’s no doubt.”

“He ran a great race and Joel (Rosario) rode him perfectly,” Sadler said. “We were really thrilled. He did such a good job, kept him clear. 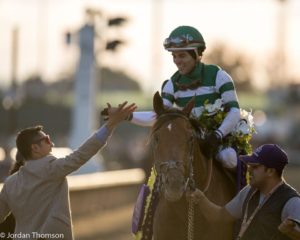 “This year at five he seems like he’s more ready to go those long distances. He has a great constitution because he needs a lot of training to run in those races. He’s been able to run in them, pull up good, continued to train hard and keep going. So it’s a tribute to him at five.”

The Southern California-based conditioner said that Accelerate will likely get the remainder of the year off and be pointed to the Pegasus World Cup (GI) at Gulfstream Park in January.

Accelerate completed the 1 ¼ miles over Churchill’s fast main track in 2:02.93.

2018’s Most Amazing Moments In Racing 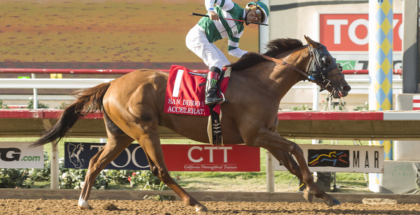