Everyone loves a good rivalry in horse racing. 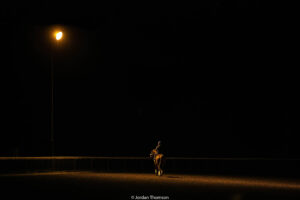 This year’s Breeders’ Cup Distaff (GI) is shaping up to be a showdown of epic proportions between two of the better distaffers in recent years — Preakness Stakes (GI) winner Swiss Skydiver and champion Monomoy Girl — and it may be the only time they’ll ever meet. While Swiss Skydiver is only three years old and has a lot of racing still in front of her, 2018 Distaff heroine Monomoy Girl is finishing up her 5-year-old season and will be sold in two days at Fasig-Tipton, likely to be retired to become a broodmare.

And something about this rivalry just feels different. The two runners are based not only in the same state, but at the very same track. Monomoy Girl resides in trainer Brad Cox Jr.’s barn under the Twin Spires at Churchill Downs for most of the year and Swiss Skydiver spends most of her time at Kenny McPeek’s shedrow just a couple of horse paths away. And while each lady has a passionate fan base, it feels like there’s a lot of crossover into the each one’s camp. 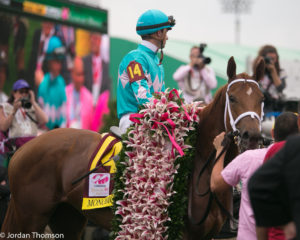 Michael Dubb, Monomoy Stables, Elkstone Group and Bethlehem Stable’s Monomoy Girl, who spent all of 2019 on the shelf battling a little of this and a little of that, hasn’t missed a beat since her layoff and has won all three of her starts this year, including the La Troienne Stakes (GI) in her last start in September. Overall the daughter of Tapizar owns an impressive career line of 14-12-2-0, $3,205,050, her only two losses coming with a troubled trip and a disqualification so the 2018 champion 3-year-old filly clearly knows how to win.

“Like I said all week, she couldn’t be doing any better,” Cox said. “We’re excited.”

Swiss Skydiver has done what the very accomplished Monomoy Girl has not – she faced and beat the boys in this year’s Preakness Stakes (GI) and was also second in the Blue Grass Stakes (G2) over this track back in July. And aside from that loss and respectable finish in the Kentucky Oaks back in September, the daughter of Daredevil has also been a winning machine. She’s traveled all over from California to New York and Florida, with stops in between both coats, and always shows up with her best run.

So far her impressive record stands at 11-6-3-1, $1,792,980. And a Distaff win, her connections hope, could earn her the most coveted trophy in racing – The Horse of the Year Eclipse Award.

“I would like people to at least consider it, especially with the fact that she’s raced all year,”

McPeek said. “That is a big deal. It is why they call Horse of the Year. She’s just been hickory all year. I think if she puts in another solid performance Saturday, you have to consider it.”

Adding to the excitement of the Distaff are the fillies and mares who will look to post the upset for their hopeful connections.

Bo Hirsch’s Ce Ce ships in from her home base of California for trainer Mike McCarthy and while she hasn’t won since taking the Apple Blossom Stakes (GII) at Oaklawn in April, she has earned three decent placings and figures to have a say here. Fellow California shipper Harvest Moon carries a four-race win streak (out of five career starts) and has shown improvement with each start. Simon Callaghan trains the Uncle Mo filly for Alice Bamford and Michael Tabor, who will be making her first start at the distance.

Dunbar Road was fifth in this race last year and seeks to improve off that effort using wins in the Delaware Handicap (GII) and Shawnee Stakes, and a third in the Beldame Stakes (G1) last out. Chad Brown trains the Quality Road filly for Peter Brant. Horologist won the Beldame in her last start and the 4-year-old Abbodanza Racing, There’s A Chance Racing, Medallion Racing, Parkland Thoroughbreds, Paradise Farm Corp. and David Staudacher-owned daughter of Gemologist has been improving, especially since being transferred to the barn of Hall of Famer Bill Mott.

Paul and Karen Eggert’s grade 1 winner Ollie’s Candy hasn’t won much since taking the Clement Hirsch Stakes (GI) at Del Mar nearly 18 months ago, but she is always right there and figures to be again for trainer John Sadler. Eclipse Thoroughbred Partners, Martin Schwartz and CHC Inc.’s Valiance defeated Ollie’s Candy last out over this track to win the Spinster Stakes (GI) and guarantee herself a spot in the gate. The Todd Pletcher-trained daughter of Tapit has only recently transitioned to a dirt career, but was also very well-accomplished on the lawn. She also will sell at Fasig-Tipton on Sunday.