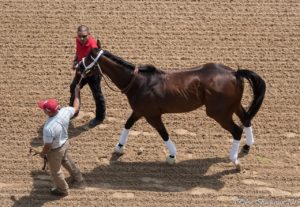 Just three weeks remain between now and the 143rd running of the Kentucky Derby (GI) at Churchill Downs and a field of 12, many of which have their connections scrambling to earn enough points to make the starting gate for the Run for the Roses, has been entered for the $1 million Arkansas Derby (GI) at Oaklawn Park.

Two years ago, Triple Crown winner American Pharoah used the Hot Springs Derby prep as a springboard to racing immortality and it remains to be seen if any of the sophomores set to vie for the 100 points on Saturday can fill his enormous racing plates.

Even though the Arkansas Derby has only produced six Kentucky Derby winners overall, it’s been a productive race for runners pointed toward the Triple Crown for quite some time. In addition to American Pharoah… (more)

The Adventures of Canonero II, Part 1