War of Will Back As Favorite After Impressive LeComte Win 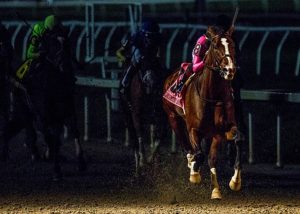 A competitive and wide open field of 14 sophomores will chase their Kentucky Derby aspirations in Saturday’s the Grade II $400,000 Risen Star Stakes Presented by Lamarque Ford – the second Road To The Kentucky Derby qualifier at Fair Grounds Race Course & Slots, which awards the Top 4 finishers points based off of a 50-20-10-5 scale.

In recent years, several winners of the Risen Star Stakes have gone on to become major factors in the Triple Crown, including last year’s winner Bravazo who went on to finish second in the Grade I Preakness Stakes and 2016 winner Gun Runner who would go on to run third in that year’s Grade I Kentucky Derby and eventually earn Horse of the Year the following year.

Already a known name on the Derby trail is Gary Barber’s War of Will who acquired 10 points when taking the Grade III Lecomte Stakes on January 19 and is currently No. 13 on the Leaderboard. Trained by Mark Casse, the son of War Front has won both of his starts over the main track which took place in the Lecomte as well as a five-length maiden special weight event over a sloppy track at Churchill Downs last November.

War of Will drew the outside in the field of 14 and is slated as the 5-2 morning line favorite by Fair Grounds clocker and odds maker Mike Diliberto.

“It’s pretty well the same bunch that he’ll be up against,” Casse said. “Obviously the post is outside but we’d rather be out there than inside. He’s got enough speed so he’ll get over and if he’s as good as we think he is it shouldn’t matter.”

Jockey Tyler Gaffalione has guided War of Will to both of his career victories and will return to the saddle for Saturday’s race.

A handful of invaders from South Florida will be making their way to New Orleans for the Risen Star, including Henley’s Joy who will make his main track debut in Saturday’s race. Owned by Bloom Racing Stable, the son of Kitten’s Joy has stakes victories in the Kentucky Downs Juvenile and Pulpit Stakes at Gulfstream Park on his resume and boasts the highest amount of career earnings having banked $372,160. Henley’s Joy is will break from post five under jockey Manny Franco at 10-1 odds. His is trained by Mike Maker.

Maker also sends out Three Diamonds Farm’s Dunph who seeks his first victory since taking the Spendthrift Stallion Stakes at Churchill Downs last November. The son of Temple City last raced in the Remington Springboard Mile at Remington Park where he was third.

Rupp Racing’s Owendale will make his stakes debut in the Risen Star Stakes, but defeated a nice group of winners in a first level allowance race at Fair Grounds on January 17. Trained by two-time leading Fair Grounds trainer Brad Cox, the son of Into Mischief defeated fellow Risen Star aspirant Frolic More (post 12, Corey Lanerie, 10-1) and well-bred Gun It (also eligible, Ricardo Santana, Jr., 10-1) in his last effort by 1 ½ lengths. Jockey Shaun Bridgmohan guided him to victory and will be back aboard for the Risen Star, where he is the 6-1 second choice .

The Risen Star Stakes is named in honor of Louie Roussel III and Ronnie Lamarque’s Champion Three-Year-Old in 1988. Trained by Roussel, the son of Secretariat won the Preakness Stakes and Belmont Stakes during his championship campaign and won four times at the Fair Grounds including that year’s Louisiana Derby.