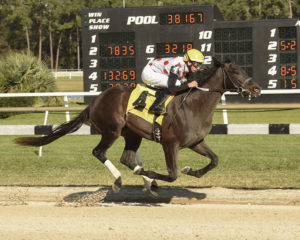 Eleven sophomores were entered for the 39th Lambholm South Tampa Bay Derby, a 1 1/16-mile Kentucky Derby prep offering a $400,000 purse and points on a 50-20-10-5 scale for the top four finishers toward making the gate in Louisville in two months. The race has been carded as the 11th race on a 12-race card, which is one of five on the day, and is expected to leave the gate at 5:25 p.m. ET.
Live Oak Plantation’s Florida-bred colt Win Win Win, who is unraced since setting the Tampa Bay Downs track record for seven furlongs in the Pasco Stakes on January 19 when he stopped the clock in 1:20.89, is the 5-2 morning line favorite for trainer Michael Trombetta. Irad Ortiz Jr. will ride the son of Hat Trick for the first time.

The second choice at 7-2 is the Florida-bred gelding Well Defined, who won the Sam F. Davis Stakes (GIII) here at this distance on February 9. Trainer Kathleen O’Connell trains the Stonehedge Farm homebred son of With Distinction, who will again be ridden by Pablo Morales, will break from post position five.

“He’s coming up to the race just as good or better than last time,” O’Connell said. “I couldn’t be happier with how he’s doing and I’m happy with the post position.This horse has plenty of speed, and Pablo fits him very well. He just has to be forwardly placed, and the rest will be seen.

“I’m just happy he’s going in the right direction and hope they all stay healthy. We need to run a big race Saturday (to stay on the Kentucky Derby trail).”

The field for the Lambholm South Tampa Bay Derby in post position order, with trainers, jockeys and morning line odds, is: