Breeders’ Cup Mile Champion Goldikova; The Amazing Mare of Gold: The 2014 Breeder’s Cup series is just around the corner on October 31-November 1 at Santa Anita Park, so it’s time to remember some great horses that made history in U.S horse racing. We’re going to start with Goldikova (IRE), the France based filly that became a popular lady in United States due to her three consecutive wins in the Breeder’s Cup Mile. 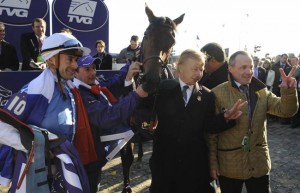 Goldikova; a daughter of Anabaa – Born Gold by Blushing Groom (FR) was ridden by Olivier Peslier and trained by the retired jockey Freddy Head. Goldikova was owned by the French partnership Wertheimer and Frere and started her career at the age of two in France, winning two races. In 2008 at 3-years-old, Goldikova lost three consecutive races, including a Group 1 stakes behind the unbeaten Zarkava, a filly who finally won the Prix de l’Arc de Triomphe that year. However, in the second half of the year, she came to feel the taste of victory with a three race winning streak beating tough horses like Henrythenavigator and looked ready to face the boys in a Breeder’s Cup race at Santa Anita.

Goldikova made her six-year-old debut on May 22, 2011 winning the Prix d’Ispahan, beating the Champion Cirrus de Aigles and then winning her fourth consecutive Prix Rothschild in France. Despite the victories, Goldikova wasn’t the dominant mare of her younger years, being defeated in her last two races in Europe. On November 5, 2011; Goldikova tried to made history and participate in her fourth Breeder’s Cup Mile but arrived in third position 1 ½ lengths behind the longshot Court Vision, finishing a brilliant career with 14 Group 1 wins in two continents.