Stallion Feature: Smart Strike Continues to be a Smart Investment

Stallion Feature; Smart Strike Continues to be a Smart Investment: There are some stallions on the market that were not the most accomplished on the track. One of the most expensive stallions on the market, currently, was mainly an allowance runner. He did win two graded stakes events, and had a short career, with only eight starts, but he would go on to become a very valuable stallion. Smart Strike was born in 1992, and didn’t race until 1995. Smart Strike would go on to be a consistent racehorse, and even more, consistent, valuable sire. 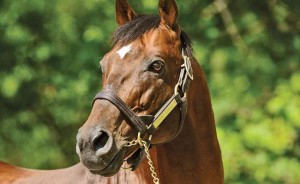 Smart Strike, one of the most expensive stallions on the market, currently, was mainly an allowance runner.
Photo: lanesend.com

At age three, Smart Strike was a beginner. He broke his maiden in his second start. In this race, he would also defeat future champion sprinter, Langfuhr. Smart Strike made every start of his career on dirt, although, he would become an important turf sire as well. Smart Strike would remain in the allowance ranks through his three-year-old season, and would sit out more than half of his four-year-old season. He wouldn’t return until July, and he showed up in 7F optional claimer. From there, Smart Strike seemed ready for graded stakes competition. Twenty days later, Smart Strike won the Grade 3 Salvator Mile at Monmouth. This would make his fifth win in six starts. He continued his winning streak a month later when he won the Grade 1 Phillip H. Iselin Handicap at Monmouth. Here, he beat Eltish and Serena’s Song to the wire. This made six wins in seven starts. The streak would be broken in his next, and last, start. The Grade 1 Woodward, run at Belmont Park, was his first try beyond 8.5F. Here, Smart Strike ran into champion horse Cigar. With only a five horse field, Cigar continued his win streak while Smart Strike was struck down, finish 4th.

Smart Strike entered stud in 1997, after being retired at 4, due to a leg injury that kept him out of the 1996 Breeders’ Cup Classic. Entering stud, he was an instant success. Through the years, he was offered at stud anywhere from $30,000 to $150,00. Currently, Smart Strike stands at Lanes End, where he entered stud, for $100,000. Only four other stallions in the United States stand for $100,000: Bernardini, Medaglia d’Oro, Distorted Humor, and Kitten’s Joy. Street Cry would be on the list, but recently passed away.

Throughout his stud career, Smart Strike has sired 1,477 foals in 17 crops. From here, he has 108 stakes winners, 57 graded stakes winners, and 12 champions. He is the sire of Centre Court, English Channel, Lookin At Lucky, Crown Queen, My Miss Aurelia, and Curlin, just to name a few. He has shown he can sire sprinters, middle distance runners, and routers. Just this year, he has sired two grade one winners, which is led by Minorette, who won the 10F Belmont Oaks Invitational (G1) in July.

Smart Strike is 22-years-old, and shows no signs of deterioration. The son of Mr. Prospector and Classy ‘n Smart has more than proved his worth, and continues to do so at Lane’s End.

Jaycito is Crying Out to be Retired