Breeders’ Cup Juvenile 2014 Contender Mr. Z: When looking for a distance runner, many just focus on the sire. Another may look deep into the distaff line to find the stamina they want the foal to have. Others may look at the quality of the family, other than the pedigree, per say. Yet another may just look at connections, the horse itself, and other little quirks. 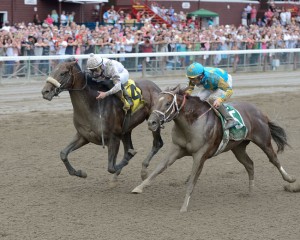 Mr. Z, pictured above on right, will have a tough field of competitors in the Breeders’ Cup Juvenile, but with his running style, pedigree, and experience, Santa Anita may fit the colt like a glove.
Photo: Adam Coglianese/NYRA

When playing juvenile races, one of the hardest things to do it handicap. Juveniles are so unpredictable, and until they begin to get into a consistent running style, hitting the board more often than not, they remain mostly a mystery.

Mr. Z has been fairly consistent in his short career. In five career starts, he won on debut, and had finished second three other times. The one flop was when he ran fifth in the Grade 3 Iroquois Stakes. Mr. Z is a front-runner. He likes to be on or near the lead. He has the pedigree to run all day, on or off the lead.

This son of Malibu Moon, out of the Storm Cat mare Stormy Bear, is likely to improve with age. Malibu Moon has had runners excel at every age, and the same goes for the sons and daughters of the late Storm Cat. Mr. Z is an average sized horse, but will likely fill out to be a muscular colt.

When looking for a Breeders’ Cup Juvenile winner, Mr. Z has a lot going for him. With the A.P. sire line over the Storm Cat sire line, he is bred to go any distance, including classic distances. Looking further back in the pedigree, Mr. Z has a double dosage of Secretariat, and a triple dosage of Bold Ruler. The Bold Ruler likely lends the speed Mr. Z has displayed. Also, if there is a double dose of Secretariat on top and bottom, this also means there is a double dose of Princequillo on the top and bottom of the pedigree. Princequillo was one of the most dominant sires to lend stamina, and did so mainly through his broodmares. Mr. Z also has a double dosage of the mare Gold Digger, who produced the gold mine that was Mr. Prospector. She can be found in Mr. Prospector on top, and in Myrtlewood Lass in the distaff line.

Mr. Z will have a tough field of competitors in the Breeders’ Cup Juvenile, but with his running style, pedigree, and experience, Santa Anita may fit Mr. Z like a glove. He will have a lot of company on the front end though, with American Pharoah, Daredevil, Lucky Player, Carpe Diem, and others showing early speed and a liking to sit closer, Mr. Z will have to dig deep to get his nose in front at the wire first.