Hardest Core Likely to be Tough off Layoff in Breeders’ Cup Turf: The Breeders’ Cup Turf is one that American horses normally struggle with. European horses usually ship, hoping to attain the highest, most prestigious turf race in America. While the European’s normally dominate the Turf division, the American turf roster this year is quite strong. One horse on that roster is Hardest Core. The gelded son of Hard Spun has found a knack for the turf. While Hard Spun has shown his offspring can reach the highest level on dirt, Hardest Core has proved Hard Spun could also be a budding turf sire. 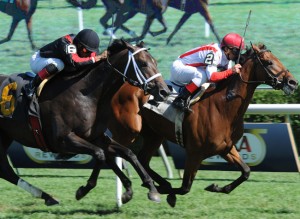 Coming into the Breeders’ Cup Turf fit is the only option, and the way Hardest Core has been training, he may be the most fit in the field. He is also a four-race win streak.
Photo: Hardest Core (left), Balance the Books (right) Coglianese/NYRA

The gelding took a while to get started. In his debut, he finished 10th in a 5.5F maiden special weight on dirt. Verrazano would end up winning this race. It took Hardest Core four races to break his maiden, which he did in a 10F maiden special weight on the Belmont Turf. Hardest Core obviously relished the increase in distance. Before this, he had run at eight and eight and one half furlongs, failing to hit the board. With his middle of the pack running style, and one driving move in the stretch to seal the deal, Hardest Core has the ideal running style for marathon distances.

Coming into the Breeders’ Cup Turf, Hardest Core won’t have a race or two under his belt. He won the Arlington Million (G1) in August, whereas the Breeders’ Cup Turf is November 1. This means the gelding is coming into the race off a nearly three-month layoff. Being fresh is likely a good thing. Horses like Main Sequence, Twilight Eclipse, Imagining, and Big Blue Kitten have spent the last months training and prepping in races.

Hardest Core is no slouch though. Originally pointed to become a steeplechase horse for deceased trainer Paul Roland, Hardest Core had a setback when gelded. He had to have over 18 feet of his intestine removed, but never showed signs of any setback. Only six months removed from the life threatening complications, Hardest Core returned to win his 2014 debut in an Allowance Optional Claimer at Parx, which continued his winning streak to two wins. Edward Graham, who took over the Roland stable, next placed Hardest Core in the 1 ½ mile Cape Henlopen Stakes on the turf at Delaware Park. By the wire, Hardest Core was three lengths in front and driving. This horse was ready for the big leagues.

The Arlington Million was Hardest Core’s graded stakes debut, and he was up against some of the best turf marathoners in the States. He was able to turn the tables on 2013 Breeders’ Cup Turf victor Magician, who finished a length back in second. He also put away Canada’s Up With the Birds and the Ramsey charge in Real Solution. Hardest Core won the million, but also won a paid entry in the Breeders’ Cup Turf.

Hardest Core has been training at Fair Hill, in preparation for the Breeders’ Cup Turf. Hardest Core also has in Graham, an ex-steeplechase jockey. Trainer Edward Graham knows what it takes for a horse to fit enough to run a 1-½ miles race. Instead of working Hardest Core on the oval for training, Edward has Hardest Core gallop up and down the hills of Fair Hill, and notes that the further they gallop Hardest Core, the more he likes it.

Coming into the Breeders’ Cup Turf fit is the only option, and the way Hardest Core has been training, he may be the most fit in the field. He is also a four-race win streak. He will also be facing the undefeated Main Sequence (Note: undefeated since arriving in the United States). Hardest Core may look like a long shot, due to the class of horses he will facing, or maybe because of the layoff, but counting him out is likely to be a mistake. He may or may not be just getting started.

Christine A. Moore Millinery; A Must for Breeders’ Cup