Breeders’ Cup 2014 Picks & Plays: The 31st running of the Breeders’ Cup takes place at Santa Anita Park on Friday, October 31st and Saturday, November 1, 2014. Lady and The Track put together an easy analysis of all thirteen Breeders’ Cup races for the two-day event. Keep in mind that the Breeders’ Cup races are extremely competitive and the stakes are high, so the key to success may not necessarily mean picking the winner of each race but picking a few of your favorites to Place or Show.

Juvenile Turf: , 11 Imperia, 4 Commemorative
is a Grade 3 winner and Grade 2 placed in Europe. In his last race he ran in a Grade 1 finishing sixth, just 2 ½ lengths behind the winner. He also has the pedigree to handle the distance. Imperia looked really impressive in his last race, braking his maiden in the Pilgrim G3. The son of the Chilean mare Cocoa Beach, with Javier Castellano in the saddle will be really dangerous. Commemorative (GB) is in a winning streak and also improving his speed figures race by race. He has tactical speed, so he’s able to stalk if the pace turns hot. A good play here would be Place and Show to Imperia.
(See Full Field & Post Time)

Dirt Mile: 1 Goldencents, 6 Golden Ticket, 9 Tapiture
Goldencents is the likely winner of the 2014 Dirt Mile. He will be sent to the front since he drew the rail. Goldencents loves Santa Anita so we probably will see him winning gate to wire, just like he did last year. Golden Ticket was second in the BC dirt Mile 2013 and he’s also working well for this race. Tapiture is a 3-year-old by Tapit that can hit the board. His connections preferred this race instead the BC Classic. We suggest to play an exacta 1/6,9
(See Full Field & Post Time)

Juvenile Fillies Turf: 2 Osaila, 6 Sivoliere, 4 Lady Eli
Osalia (Ire) looks like the class of the field since she won three stakes races in Europe. Sivoliere (Ire) is a classy filly with an awesome pedigree and also recorded good workouts at Belmont Park. Lady Eli won handily in her last race and looks like one of the U.S fillies that can defeat the Euros. In this race an exacta box 2,6,4 would be fine.
(See Full Field & Post Time)

Longines Distaff: 7 Don’t Tell Sophia, 10 Untapable, 11 Close Hatches
Don’t Tell Sophia is an amazing mare who cost only $1000 at the Keeneland Sales. She is in top form and looks ready to run the race of her life. She also has Joe Rocco, Jr in the saddle, a jockey who knows her very well. Untapable is on paper the best filly, but the outside post will hurt her. She’s has fast works in Santa Anita but she ran awful in her only race in this track. Close Hatches is the speed of the speed. Her last race was a mess but she has all the talent to bounce back. In the Distaff we’re going to play Don’t Tell Sophia to win-place-show.
(See Full Field & Post Time)

14 Hands Winery Juvenile Fillies: 5 Cristina’s Journey, 4 Conquest Eclipse, 1 Feathered
Cristina’s Journey is unbeaten in two starts with not the best speed figures, but she looked really comfortable with plenty of gas in the tank. Conquest Eclipse last race was pretty good and she can take advantage of a possible hot pace. If you draw a line to Feathered’s last race, you’ll only see a talented filly. She has Javier Castellano in the irons and that’s a plus. The suggested play in this race is Cristina’s Journey to place.
(See Full Field & Post Time)

Filly & Mare Turf: 3 Dank , 2 Just the Judge, 5 Secret Gesture
Dank (GB) is the defending champion. She’s returning from a layoff but looks one step above this field. Just the Judge (Ire) won her last race in Woodbine showing courage, she’s in top form and if Dank is not in her best day, she can win. Secret Gesture (GB) is a classy filly that most of the time is hitting the board in Graded Stakes in Europe. This is a wildcard race for us and we are still working on picks & plays.
(See Full Field & Post Time)

DraftKings Filly & Mare Sprint: 5 Artemis Agrotera, 7 Judt the Beauty, 3 Stonetastic
Seven furlongs is distance that suits Artemis Agrotera perfectly. She has two amazing wins with that distance this year, so she’s the logical choice. Judy The Beauty ran a huge race last year in Santa Anita losing by only ½ length with Groupie Doll in the Breeders’ Cup Filly & Mare Sprint. I should add that she’s a Santa Anita lover. Stonetastic is elegible to bounce back; she will try to win this race wire to wire. A good play here is Win – Place to Artemis Agrotera, and an exacta 5/7,3.
(See Full Field & Post Time)

Turf Sprint: 11 Undrafted ,14 No Nay Never, 6 Home Run Kitten
Undrafted has a respectable fourth place in a Grade 1 race in Newmarket in July. He returned with a good third place in Kentucky Downs and since that effort he’s working very well. Despite he has no experience in the Downhill, No Nay Never is unbeaten in the turf and that’s respectable. Home Run Kitten is moving up in class, but he likes the Downhill and he will roll late. In this race a good play would be Undrafted to show.
(See Full Field & Post Time)

Sentient Jet Juvenile: , 9 Carpe Diem, 13 Upstart
is definitely the horse to beat, he likes Santa Anita track and he’s working like a champ and has a good post position. Carpe Diem is unbeaten in two starts and amazed everyone in his last race. Despite the outside post, Upstart can hit the board. He’ll be able to run off the pace. We suggest to play American Pharoah to Win – Place, and also an exacta 5/9,13.
(See Full Field & Post Time)

Longines Turf: 1 Telescope, , 11 Chicquita
Telescope (Ire) faced a tougher crowd in Europe and has been pointed towards this race for months. He also gets his regular jockey Ryan Moore. is the defending champion but it seems he needs to improve to win this race. Chicquita (Ire) is a filly with good credentials, she has just one victory in seven starts, but she was second to Treve and Tarfasha, who both are two spectacular runners. Another wildcard race for us, check back for picks & plays.
(See Full Field & Post Time)

Xpressbet Sprint: 6 Rich Tapestry, 8 Palace, 14 Bourbon Courage
Rich Tapestry came from Hong Kong with not the best credentials but it seems he loves Santa Anita since he beat Goldencents in the Santa Anita Sprint Championship (G1). He looks fit in the mornings. Palace could benefit from a pace duel as he will stalk the pace and make his move in the right time. Bourbon Courage won his last race in a fashionable style. After that race his connections took the opportunity to enter him in this race. The play here would be Rich Tapestry to place and show.
(See Full Field & Post Time)

Mile: 5 Toronado, 9 Anodin, 4 Mustajeeb
Toronado (Ire) is a multiple stakes winner in Europe and a horse who loves the mile since he has 3 wins and 3 seconds in seven starts in that distance. If he gets a clean trip, he will be tough to beat. Anodin suffered a tough trip in his last race but despite the trouble he was able to finish just 4 ¼ lengths behind the winner Olimpic Glory. Maybe he will be overbet because he’s a full brother of Goldikova, a popular mare in United States. Mustajeeb (GB) is a Grade 3 winner but he has good races in Grade 2 and Grade 1 stakes. In this race you can single Toronado and for exotic plays like a Daily Double or Pick 3.
(See Full Field & Post Time)

Classic: 12 Candy Boy, 13 California Chrome, 10 Footbridge
Candy Boy’s last race was better than the paper said because he ran in a track that favored the speedy horses and he was able to finish third coming from the clouds. He likes the Santa Anita track and also likes the distance. If the pace turns pretty fast he can win this race at huge odds. California Chrome was 6th in his prep race, the Pennsylvania Derby. Since that effort he’s improving day by day and looks ready to show his best in the Classic. Footbridge will run very well, he will appreciate the fast pace. He’s ready to run the best race of his career. In the Classic a good play would be Candy Boy for win – place –show.
(See Full Field & Post Time) 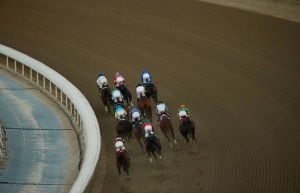 A Bittersweet Goodbye; How Mucho Macho Man Gave Me The Horse Racing Bug