High Hopes for Kentucky Derby 2015 Contender Texas Red: Going into the Breeders’ Cup Juvenile, Texas Red was an easily overlooked colt. The promising juvenile, American Pharoah, had easily defeated him, in his last start. Texas Red was calmer than all the others colts before race time. He walked about the paddock, almost in a sleep like trance. His head was hung and his demeanor calm. While all the other colts were on their toes, Texas Red was looking at those around him, maybe hoping someone would give him a treat. 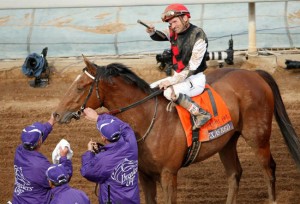 When the call for riders up was sounded, Texas Red turned into a different horse. His head shot up, his ears pricked, and his chest seemed to swell. He knew it was time to be serious. With Kent Desormeaux on his back, Texas Red seemed ready for battle.

The race unfolded seemingly picture perfect for Desormeaux and Texas Red. Beginning their charge on the turn, the colt dipped and dove through the flock of horses, and by the top of the stretch, Texas Red was five wide, out in the clear of traffic. His stride lengthened and his body lowered, Texas Red was setting sail for home. Flying home, Texas Red pulled away from the herd of horses behind him to hit the wire 6 ½ lengths in front of second place finisher, the previously undefeated Carpe Diem.

With another Breeders’ Cup weekend in the books, the road to the Kentucky Derby has now passed through Churchill Downs, Del Mar, Belmont, Keeneland, and Santa Anita. Horses like Lucky Player, American Pharoah, Daredevil, Carpe Diem, and Texas Red all have began their hunt for a spot in the starting gate on May 2, 2015.

If any of these colts are going to make it, Texas Red would seemingly have a worthy chance. His pedigree alone is quite something. Looking at the sire line, Texas Red is by Preakness and Belmont stakes winner Afleet Alex. Afleet Alex could have possibly been a Triple Crown winner, had he not had the troubled Kentucky Derby trip, where he finished a close third behind Giacomo and Closing Argument. After his Belmont Stakes win, Afleet Alex was retired due to injury. Entering stud for $40,000 at Gainesway, the stallion has since been reduced multiple times, now standing for only $15,000. Afleet Alex babies are not the type a trainer or owner would expect to be making the early two-year-old races. Afleet Alex offspring are the later maturing type. Texas Red seems to just be getting started.

On the distaff sire, Texas Red seems geared toward distance, even more so than his sire. Texas Red’s dam, Ramatuelle (CHI), was a very consistent runner overseas in Chile, before coming here. In her first two starts in the states, the mare went 2-for-2 at Santa Anita on the dirt for trainer John Sadler. She would go on to be a graded stakes placing mare, before retiring. Her sire, Juene Homme was a Kentucky bred, son of royal Nureyev and the Alydar mare, Alydariel. Jean Homme did most of his racing across the pond, but did make a few starts in the United Stakes, some of which, he won. He would place in the G1 Hollywood Derby (ahead of the legendary Cigar), and win the G2 Citation Handicap.

Texas Red may not be the most expensive colt to have won the Breeders’ Cup Juvenile or head down the road toward the Kentucky Derby, but the owners knew that their $17,000 colt could be something special. Keith Desormeaux, trainer and partial owner, has not specified where he wants to send the colt next, but as of now, the colt is on the road to Kentucky with hopes of roses and riches at the end of that road. Texas Red is carrying the hopes of his owners, and the race his sire did not win, on his withers.