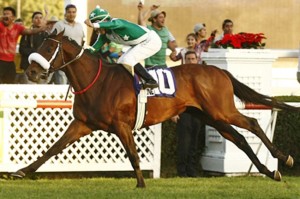 Il Campione will try his luck in the Clasico St Leger, the 2nd leg of the Chilean Triple Crown on December 6, 2014.
Photo: www.jcb.com.br

Because Il Campione is a proven specialist on the turf, his connections studied to possibility to run in the prestigious Clasico Carlos Pellegrini (G1) in Argentina instead the St Leger in the dirt, but they finally made the decision to gives Il Campione a shot in the Triple Crown second leg.

Il Campione is a son of Scat Daddy – Global Gold by Pleasant Tap and has a record of 6 wins and 1 second in seven starts, all of the races in the turf. The horse is ridden by Hector Berrios, trained by Sergio Inda, and his owner is the Chilean soccer player Arturo Vidal in partnership with the breeder Pedro Hurtado.

Evidently, the Clasico St Leger will be a tough test for Il Campione because it will be his first race on the dirt. Now the question is, Can Il Campione handle the dirt? This question will be answered on December 6, 2014 when the son of Scat Daddy is set to compete in the Chilean second leg.