Stallion Feature; Offlee Wild a Surprisingly Wild Sire: With Bayern as headliner of recent news, he has not only boosted the reputation of himself, owners, trainer, and jockey, but his sire! Bayern is by Offlee Wild, son of 1984 Breeders’ Cup Classic winner, Wild Again. The winning of the Classic skipped a generation with this male line, but with the winning abilities of Bayern, interests have been taken in Offlee Wild. Pin Oak Lane in Pennsylvania had stood the stallion from 2011-2014. For that short while, the stallion stood for a small fee of $4,000, not far off from his initial 2006 fee of $7,500, instilled by Darley when he retired in 2005. Recently, Turkish interests purchased the stallion. This means, upon Bayern’s retirement, the Wild Again sire line will depend on him, for the most part. 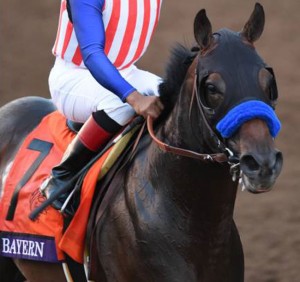 With Bayern as headliner of recent news, he has not only boosted the reputation of himself, owners, trainer, and jockey, but his sire! Bayern is by Offlee Wild, son of 1984 Breeders’ Cup Classic winner, Wild Again.
Photo: Breeders’ Cup Photo ©

Offlee Wild was born in 2000, being one of the later crops of the 1984 Breeders’ Cup Classic winner, Wild Again. The colt was out of the Seattle Slew mare, Alvear. Alvear was a half sister to prominent turf sire Dynaformer. The colt should have been able to get classic distances easily, given his pedigree.

Starting his career in 2002, the colt broke his maiden in his second start in a 6F sprint over the main track at Churchill Downs. Having another start in an allowance, finishing second, Offlee Wild took a break before coming back to run as a three-year-old. His first graded stakes start was the G3 Holy Bull, which he won over horses such as Funny Cide and Seek Gold. Having stretched out successfully, the colt tried the Blue Grass Stakes, over 9f over the main track at Keeneland. Finishing second, the connections had Derby Fever. Sent to the Kentucky Derby, Offlee Wild didn’t fair well and finished a disappointing 12th behind winner Funny Cide. Given a rest, he came back four months later, only to finish well off the board in the Indiana Derby (G3). Offlee Wild didn’t seem the same, having only hit the board in an 8.5F Allowance.

Coming back at age 4, the son of Wild Again tried grade three company again, but finished 8th in the Skip Away Stakes. In his next start, he finally got another win, but in an Allowance race at Belmont Park. Trainer Rick Dutrow Jr. again tried the colt in graded stakes company. Entering into the G2 Massachusetts Handicap, the colt hit the wire a head in front of the Kentucky Derby and Preakness winner Funny Cide, winning the 9F contest.

After a lengthy break, Offlee Wild came back at age 5. His first start back was a positive one. He finished second in the John B. Campbell Breeders’ Cup Handicap at Laurel Park. Next out, he won the G3 Excelsior Breeders’ Cup Handicap (G3) over 9F on the main track at Aqueduct. After a disappointing start in the Pimlico Special, Offlee Wild finally earned his first grade one in the 10F Suburban Handicap at Belmont Park. After another start, the horse was retired due to ankle trouble.

Offlee Wild entered stud in 2006 at Darley in Kentucky. Standing for the initial fee of $7,500, the son of Wild Again wasn’t expected to excel. However, he shocked everyone when he was the 2009 leading Freshmen Sire when his filly She Be Wild won the Arlington-Washington Lassie Stakes (G3) and the Breeders’ Cup Juvenile Fillies (G1). In 2011, Offlee Wild was moved to Pennsylvania, where he stood until Turkish interests, who also bought Any Given Saturday from Pin Oak Lane, purchased him.

For 2014, Offlee Wild recently jumped into the #12 spot on the General Sires list due to Bayern, a three-year-old son of Offlee Wild, won the $5 million dollar Breeders’ Cup Classic. For the year, Bayern is the only grade one winning offspring of the stallion. He is represented by 129 runners, 68 winners, 9 stakes winners and 12 stakes wins, and 2 graded stakes winners. His top four offspring of the year are Bayern, Hortensius (ARG), a group II winner in Argentina, Ethan’s Boy, a two-year-old stakes winning filly, and Waha Wild, a two-year-old gelding who recently won a listed stakes at Evangeline Downs.

With Offlee Wild off to continue his stud career in Turkey, he hasn’t sire a son that has shown the capability of carrying on the Wild Again line like he has. Bayern has already been confirmed to run as an older horse, and until Bayern retires, this sire line may struggle a bit. However, with the bloodlines of Offlee Wild, his overseas breeding interests should spike, as his blood should blend nicely with the mares overseas.