Keen Ice Points Towards 2015 Kentucky Derby: Kentucky Derby 2015 odds have been released and horses most likely to win the 10F contest for three-year-olds are at lower odds than those less likely. One horse, which opened up at 150-1, is a contender for the event, whether those who like the future bets know it or not. 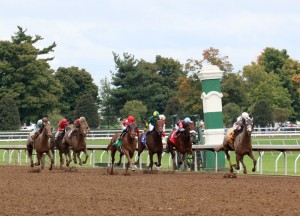 Keen Ice finished 5th in a field of 12 during the 2014 G1 Claiborne Breeders’ Futurity at Keeneland.
Photo: Keeneland

Keen Ice is a young son champion racehorse and Hall of Fame stallion, Curlin. On debut, the colt finished fourth in a far too short maiden special weight at Ellis Park. 5.5F is too short for the colt. Next out, the Dale Romans trainee went a mile, and battled Starbound and Tiznow R J for the win, and prevailed by about a head. The colt had shown he had what it took to be a distance runner with some fight in his heart.

Romans and Donegal Racing have been responsible for horses such as the ill-fated Dullahan. Seeing the graded stakes potential, Keen Ice was headed to Keeneland for his graded stakes debut in the G1 Claiborne Breeders’ Futurity. Facing horses such as Hashtag Bourbon, Carpe Diem, Bold Conquest, and Mr. Z, Keen Ice was a bit of a longshot. Kept on the inside the entire race, Keen Ice never got a true chance to show his long stride. He did make up ground between horses in the herd and finished fifth in the full field of twelve.

Since the Breeders’ Futurity, Keen Ice has been working consistently at Churchill Downs, and the colt could possibly make one last start this season, but it would be no surprise if Donegal and Romans let the colt mature a bit more, physically and mentally, to prepare him for a Triple Crown campaign.

In terms of pedigree, Keen Ice has it all. Being a son of the mighty Curlin, Keen Ice is likely going to inherit soundness, durability, and grit. Dam, Medomak, never won a race and only started once. Her sire, however, did win multiple grade one races, including the Breeders’ Cup Classic. Who is it? Awesome Again! Awesome Again hasn’t proven to be a highly regarded broodmare sire, but he does pass on grit and heart.

Keen Ice may not be a grade one winner yet, but with the pedigree, distance, training, and management, he is likely to develop into a strong horse. Can he make the 2015 Kentucky Derby? Who knows, but a lot of positives about the horse point to yes!