Honor Code Returns a Winner at Aqueduct: Comebacks are always highly anticipated for horses of high caliber. We have seen comebacks of Hoppertunity, Constitution, and now, Honor Code. The ridgling son of Belmont Stakes and Breeders’ Cup Classic winner, A. P. Indy, Honor Code was a looming threat on the 2014 Triple Crown trail. After a distant second in an allowance at Gulfstream, the ridgling was found to have a high upper suspensory injury, which would take a while to heal. 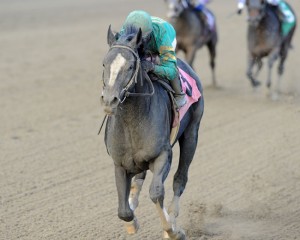 After missing all of the classics, both in the spring and summer, Honor Code finally made it back to Aqueduct for an Allowance Optional Claimer on Saturday, November 22, 2014 with Javier Castellano.
Photo: Coglianese/NYRA

After missing all of the classics, both in the spring and summer, Honor Code finally made it back to Aqueduct for an Allowance Optional Claimer on Saturday, November 22, 2014. Not many expected the late runner to win, due to his need for racing room (aka distance). The comeback was nothing short of amazing when Honor Code was still at least 5-7 lengths back at the top of the stretch, before swinging out, splitting horses, and lengthening his stride to win the race by about a length.

Honor Code is among the last crop of A. P. Indy babies, and is one of the most regally bred horses the market has seen in a long while. By A. P. Indy, Honor Code hails from the female family of Hall of Fame mare Serena’s Song. Just this past Keeneland November sale, a Tapit weanling, a half sister to Honor Code, sold for $3 million dollars. Honor Code’s dam, Serena’s Cat, by Storm Cat was a stakes winner herself, while Storm Cat was a grade one winner and placed in the 1985 Breeders’ Cup Juvenile, behind winner Tasso. Storm Cat would become the king of thoroughbred breeding and racing, while he was in his prime.

What is next for Honor Code is unknown, but what he did prove today that he is busting at the seams with class and talent! The ridgling is to likely race as a four-year-old, and eventually, likely to stand at Lane’s End, who owns the horse, where his legendary sire reigns supreme, even if he is now pensioned from breeding. Honor Code could possibly follow in his sire’s hoof prints, but for now, Honor Code is likely to continue racing, displaying his excellent talent. 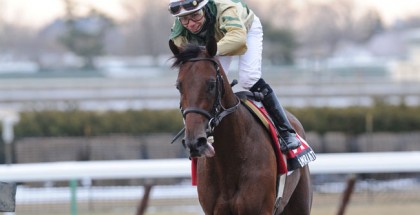