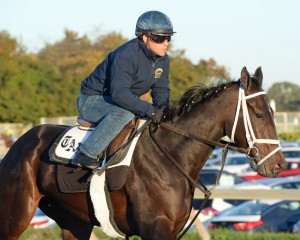 Feathered is a nicely balanced filly with a good slope to her hip. She is athletic and leggy. Her gallop has no wasted motion and she looks like a filly that needs to grow into herself a bit more. She could easily be a factor on the Road to the Kentucky Oaks.
Photo: Susie Raisher, Coglianese/NYRA

Feathered is a two-year-old filly, trained by Todd Pletcher for the Eclipse Thoroughbred Partners, which purchased Feathered earlier this year at the Ocala Breeders’ Sales Company Selected Sale of Two-Year-Olds in Training. She was picked up for an honest $300,000 in March.

Five months after purchase, Feathered finished second in her debut at Saratoga. She was beaten by a head in the 6F contest as the clear favorite. Trainer Todd Pletcher sent her out again at the end on August, where she broke her maiden, as the favorite, at 7F on the main track at Saratoga.

Todd Pletcher knows when he has a good horse, and Feathered looked to be improving fast. Next, he sent the filly to Belmont at the beginning of October to start in the G1 Frizette Stakes. Stepping up into graded stakes off a maiden score, Feathered was not made the favorite for the first time in her short career. The Frizette was run on a sealed sloppy track, which seemed to not inhibit the winner, By the Moon, but Feathered was noted to only have a “mild kick.” She may not have liked the mud.

Next out, the filly started in her second grade one event; the Breeders’ Cup Juvenile Fillies. Within three months, Feathered had broken her maiden, hit the board in a grade one event, and now was running against the best dirt fillies in the country. Todd Pletcher sure was confident. Feathered did fare pretty well in the race. She finished a half-length behind third place finisher, Wonder Gal. However, Feathered had one of the tougher trips in the race. Her and favorite Angela Renee bumped at the start and then Feathered didn’t have the kick in the final furlong to split her rivals.

Feathered is apart of the last crop sired by the late Indian Charlie. Indian Charlie only lost one race in his short career. He finished third in the 1998 Kentucky Derby as the favorite, behind Real Quiet and Victory Gallop. He was retired shortly after the Derby when he suffered an injury in training. He went on to sire multiple high-class horses, including Uncle Mo (2010 Two-Year-Old Champion Colt), Indian Blessing (2007 Two-Year-Old Champion Filly & 2008 Female Sprint Champion), and Fleet Indian (2006 Older Female Champion).

Feathered is out of the Dynaformer mare, Receipt. Receipt never won more than her maiden race, but did finish third in the Caveat Competor Stakes at Saratoga. Dynaformer was a much better racehorse than his daughter. He was a graded stakes winner and was a highly influential sire during his stud career.

Feathered is young, more inexperienced than a lot of fillies in her crop, and she should mature as she ages, and likely will be more competitive around the 7-8 furlong range. Dynaformer was a speedball himself, and Indian Charlie passed down a balanced mixture of speed and stamina to his offspring. Feathered is a nicely balanced filly with a good slope to her hip. She is athletic and leggy. Her gallop has no wasted motion and she looks like a filly that needs to grow into herself a bit more. She could easily be a factor on the Road to the Kentucky Oaks.