Kentucky Oaks 2015 Contender West Coast Belle on the Right Track: 2014 was the year of Tapit. Tapit offspring have amassed more than $16.3 million dollars, with the chief earner being Kentucky Oaks and Breeders’ Cup Distaff winner Untapable. Tapit is the sire of Triple Crown spoiler and Jockey Club Gold Cup winner Tonalist. Tapit is known for his precocious juveniles, fast sophomores, and his consistent runners. This year, Tapit is responsible for another currently undefeated juvenile filly, named West Coast Belle. 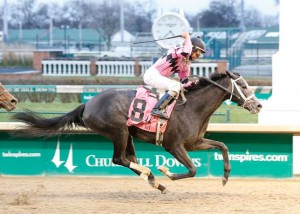 West Coast Belle is owned, raced, and bred by Gary and Mary West. The connections have been seen in the past with Kentucky Derby probable Violence, Power Broker, and Flashback. The owners have instilled their promising filly with trainer Wayne Catalano, who has a knack for getting fillies ready for big races. He was the trainer of Stephanie’s Kitten in 2011 when she took the Breeders’ Cup Juvenile Fillies Turf. Catalano is also the trainer for 2009 Champion Two-Year-Old Juvenile Filly, She Be Wild, winner of the 2009 Breeders’ Cup Juvenile Fillies.

West Coast Belle is a talented filly, obviously. She broke her maiden at first asking, going 5.5F at Monmouth Park. Debuting in September, Catalano didn’t send the filly to the Breeders’ Cup, but instead, gave her a month off before bring her back in October in the listed Rags to Riches Stakes at Churchill. The race is run at one mile on the main track. West Coast Belle passed yet another class test when she walked over the field, winning the race by 6 ¾ lengths. The Golden Rod was West Coast Belle’s first attempt at graded stakes competition, which she accepted the challenge with ease.

West Coast Belle has a picture perfect pedigree for 9F, which is the length of the Kentucky Oaks. By Tapit, West Coast Belle is out the of the Unbridled’s Song mare, Splendid Solution. While Splendid Solution never graduated passed the allowance ranks, Tapit was a splendid, promising young racehorse. Tapit won the G1 Wood Memorial before starting in the 2004 Kentucky Derby. Finishing 9th in the race, behind Smarty Jones, was found to have an injury. After being off for four months, the colt returned in the G2 Pennsylvania Derby, again, finishing 9th. Retiring after the second unsatisfactory finish, the stallion quickly rose to greatness in the stallion business.

West Coast Belle is on the right track to make the 2015 Kentucky Oaks starting gate. She already has earned 10 points, and is likely to excel as she moved up the graded stakes latter. She has a promising record already, and has already been campaigned conservatively and responsibly. Her pedigree is picture perfect for a Kentucky Oaks winner, and as of right now, she may be the best future bet for the 2015 Oaks.