Stallion Feature; Stormy Atlantic Precocious and Consistent at Stud: Some stallions retire with championships in the books, while others retire after getting a late start, after being plagued with health problems. With a stellar pedigree, one stallion made an impact in a big way when he entered stud at Bridlewood in Florida in 1999. Stormy Atlantic entered stud after finally make his presence known at the age of four when he won 6 of his 13 starts, which included two stakes races. The son of Storm Cat, which flashed some brilliance, he was not the most accomplished son of Storm Cat, but he has gone on to become a very accomplished stallion, standing in Kentucky, on the grounds of his purchase by Hill n’ Dale in 2003. 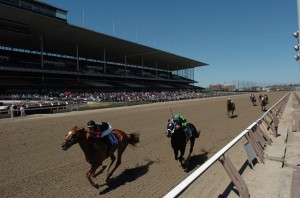 Stormy Atlantic didn’t flash much brilliance on the racetrack, but in his two stakes wins, Stormy Atlantic was a pure sprinter. Winning the Demetrius Stakes at 6F and the Havre De Grace Stakes at 5.5F, both starts on dirt. In his other wins, which came in a maiden win and three allowance wins, he won all of his other starts at 6F.

By his pedigree, Stormy Atlantic should have been able to handle longer distances. The physical issues could have possibly hindered his chances. Out of the Seattle Slew mare, Hail Atlantis, Stormy Atlantic had a pedigree to be a successful stallion as well. Retiring after his four-year-old year, Stormy Atlantic was well received. A filly from his first crop set a new sales record when selling for $1.9 million in the 2002 Barretts March sale to Ahmad bin Salman. Eventually named Atlantic Ocean, the filly went on to win the Grade 3 Miesque Stakes at 2 and the Grade 3 Santa Ysabel Stakes at 3.

In 2014, Stormy Atlantic had multiple juveniles that reached stakes level, including Conquest Typhoon (G2 Summer Stakes), Conquest Tsunami (Colin S.), Unhindered (My Dear S.), and Cyclogenisis (Laurel Futurity). However, for commercial value, Stormy Atlantic juveniles tend to fizzle out, as they grow older. However, there are a few exceptions. Up With the Birds is a four-year-old, winner of the 2013 G1 Jamaica Handicap at Belmont. Up With the Birds was also honored with Canada’s Horse of the Year and Three-Year-Old Champion in 2013. Stormy Atlantic also sired seven-time graded stakes winner, Get Stormy, who, throughout his career, defeated horses such as Wise Dan, Court Vision, and Hymn Book.

Arguably one of the better value stallions, Stormy Atlantic likely has many more healthy years ahead of him, and has exceeded most expectations. While he hasn’t achieved the status his star sire did, Stormy Atlantic is a sire of precocious juveniles, sturdy runners, and smart offspring.