Stallion Feature; The Top Five First Crop Sires of 2014: Stallions are the foundation of the breeding farms. The stallions bring in the most money. As a young stallion, the stud fee one commands won’t be the $80,000 fee that is comparable to Distorted Humor or $100,000 the Medaglia d’Oro commands. Young stallions usually don’t start off with the extremely high numbers. The top five first crop sires command no more than $35,000. By 2014 earning, the top first crop sires are Quality Road, Super Saver, Lookin At Lucky, Munnings, and Temple City. These young sires have every chance to excel, and are already proving that they are worth their stud fees. 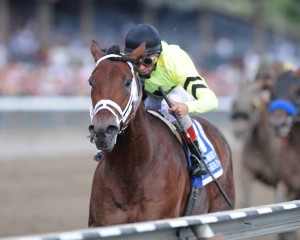 Quality Road, pictured above in the 2010 Woodward, has all the right genes to continue his reign as a top quality sire.
Photo: Coglianese/NYRA

Quality Road stands at Lane’s End for a fee of $35,000. In his first crop, Quality Road has two graded stakes winners, including Breeders’ Cup Juvenile Turf winner Hootenanny. Hootenanny also won the Windsor Castle Stakes at Ascot earlier in 2014. Quality Road also has Blofeld, a juvenile who recently won the G2 Nashua Stakes, earning ten points on the Road to the Kentucky Derby.

Quality Road has all the right genes to continue his reign as a top quality sire. He is by Elusive Quality, a high profile sire that stands at Darley Stud in Kentucky. Elusive Quality was a very fast runner and has a reputation for siring all types of horses. Quality Road was one of his fastest sons. The stallion is out of the Strawberry Road (AUS) mare, Kobla. Kobla was not placed in her two starts, but her sire, Strawberry Road (AUS) was a very high quality racehorse. He was never off the board in any of his starts in Australia, and after coming to America, was a grade two winner.

Super Saver also has a super pedigree. Super Saver is by stallion Maria’s Mon, out of the A.P. Indy mare, Supercharger. A.P. Indy has a reputation for being a top broodmare sire. Maria’s Mon was a top quality racehorse in his short career. He was a multiple graded stakes winner, including the G1 Champagne Stakes. Supercharger was not a graded stakes horse, but she was a quality allowance filly in her short career.

Super Saver is likely to get top quality mares as he continues to show that he can pass on his speed and stamina to his offspring. He has had some fragility in his first crop, however. Competitive Edge and Hashtag Bourbon have been sidelined this season from injuries to their legs and ankles. Hopefully Super Saver does not make fragility a common trait to pass on.

Lookin At Lucky was a top juvenile and sophomore among his crop. With 38 runners so far from his first crop, Lookin At Lucky has only one graded stakes winner, but he does have 4 stakes winners. For a fee of $25,000, Lookin at Lucky has already collected over $1.2 million in 2014 earnings. His offspring included G3 winner Lucky Player, Four Leaf Chief, and Good Luck Gus, who is his chief earner.

Lookin At Lucky was a multiple graded stakes winner, a two-time Eclipse Award winner, smartly bred colt, and now, a precocious sire. Lookin At Lucky is, so far, nicking with multiple sire lines, including Storm Cat, Cure the Blues, and Deputy Minister. For $25,000, Lookin At Lucky looks to be on his way to better quality mares and higher stud fees.
Munnings, stable mate of Lookin At Lucky, stands at Ashford Stud for a modest fee of $10,000. The son of Speightstown is off to an astonishing start at stud. With 2014 earnings just short of a million at $953,765, Munnings is responsible for one graded stakes winner and two stakes winners. His juveniles are proving to be fast, sprinter types, with the ability to win. His chief earner is Lake Sebago, who recently won the Smart Halo Stakes. 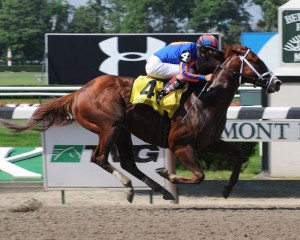 As a young sire, Munnings, pictured above at Belmont Park in 2010, is off to a very fast start.
Photo: Coglianese/NYRA

As a racehorse, Munnings was a multiple graded stakes winner and grade one placed. He ran with the best, finished third in the 2009 Haskell behind Rachel Alexandra.
Pedigree said that Munnings would be fast and successful, both on the racetrack and in the breeding shed. A son of Speightstown, Munnings is out of the Holy Bull mare, La Comete. Speightstown was a grade one winner sprinter, winner of the 2004 Breeders’ Cup Sprint, and the 2004 Eclipse Award Champion Sprinter. La Comete was unraced, but Holy Bull is a Hall of Fame horse, 1993 Champion Three-Year-Old, and 1994 Horse of the Year.

With Temple City’s pedigree, he is likely to throw mostly turf runners. His top offspring are Startup Nation, which won the G2 With Anticipation Stakes at Saratoga. His other stakes horse is Saratoga Heater, who won the Bertram F. Bongard Stakes at Belmont on the main track.

Temple City has the pedigree to become a top quality sire, especially on the turf. He has a fantastic chance to carry on the Dynaformer sire line, and if managed correctly, Temple City could become an expensive turf sire. 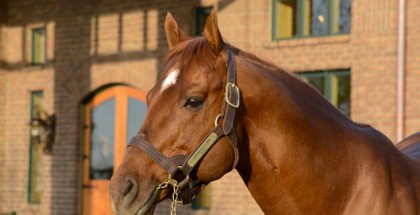