2015 Kentucky Oaks Contender Maybellene Continues To Improve: Kentucky Oaks contenders don’t always have to have the pedigree geared toward distance that Kentucky Derby contenders need. When pedigree is borderline for achieving nine furlongs, which can be enough to get a filly home in the Oaks, but not on Derby day. Maybellene has a pedigree that is likely to follow this statistic. Maybellene is graded stakes placed, but has yet to graduate from the allowance ranks. 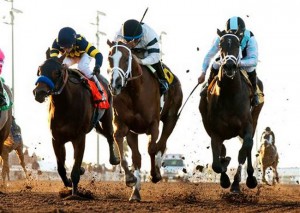 Maybellene is a part of the first crop of 2010 Preakness Stakes (G1) winner Lookin At Lucky. Lookin At Lucky was a successful racehorse in one very inconsistent crop of sophomores. However, Lookin At Lucky faltered both times he attempted to win a race over 1 1/8 miles. The two times he ran 1 ¼ mile races, he finished off the board. The Kentucky Derby, he finished 6th behind Super Saver and 4th in the Breeders’ Cup Classic behind Blame and Zenyatta. He did however, excel at 1 1/8 miles and shorter. Lookin At Lucky won multiple graded stakes events, including the Haskell (G1), the Rebel Stakes (G2), and the Best Pal Stakes (G2). He also placed in the G1 Breeders’ Cup Juvenile and the G1 Santa Anita Derby. Through his two-season career, Lookin At Lucky amassed more than $3.3 million in earnings.

Maybellene is out of the unraced Giant’s Causeway mare Greathearted. Giant’s Causeway never finished worse than second in any of his thirteen starts. Giant’s Causeway was a Group 1 winner in Longchamp and a Stakes winner at Ascot. In his lone start in the United States and his first start on dirt, he finished second in the Grade 1 Breeders’ Cup Classic in 2000 by a head to Tiznow, who went on to win again in 2001. Giant’s Causeway has proven to be a very valuable sire, siring horses such as Take Charge Brandi, Carpe Diem, Abaco, Imagining, Red Rifle, and Fed Biz. Most of Giant’s Causeway’s offspring appreciate extended distances, which means he passes on stamina to his progeny.

Maybellene may take a while longer to really mature physically and mentally, but the Starlet (G1) likely helped her a lot. As distances get longer, Maybellene is likely to continue to improve, and down the road, she may even find a home on the turf, as her pedigree has quite a strong turf influence on both sides. Right now, she has run well on both all-weather and dirt surfaces. The Kentucky Oaks is run on dirt on the first Friday in May at 1 1/8 miles at Churchill Downs. Maybellene is likely to appreciate the 9F and can improve as she continues to prep. Trainer Bob Baffert is well equipped to prepare a filly for the Oaks, as he won in 2011 with Plum Pretty and in 1999 with Silverbulletday. Whether Maybellene is up to the caliber of Plum Pretty and Silverbulletday has not shown through yet, but she has time to mature and put it all together. She has some Oaks points from her third place finish in the Starlet, but she needs to earn more through her early three-year-old season to make the Oaks field.