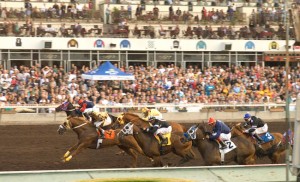 Firing Line will make his way down the 2015 Kentucky Derby Trail in the Los Alamitos Futurity on Saturday, December 20, 2014 at Los Alamitos Racecourse.
Photo: losalamitos.com

Today we introduce a Firing Line, who will compete in the 2014 Los Alamitos Futurity. He is the winner of 1 race in 2 starts. In his debut, Firing Line gifted the race because he was off to a slow start. Firing Line is a harmonious horse with acceleration exclusive of champions. It’s true he has not run two turns yet, but what he has shown up until now is worthy of applause.

Despite the troublesome debut, Firing Line was able to arrive second just 1/2 length behind the good horse Alright Alright, after running very hard in the stretch. In his second start, this time with a clean trip, he stalked the pace and pulled away several lengths in the stretch handily and never tired out.

Firing Line is a good looking horse, son of Line of David, trained by Simon Callaghan and owned by Arnold Zetcher LLC. Mike Smith has ridden him in his 2 starts. Firing Line pairs up with Rafael Bejarano for the 2014 Los Alamitos Futurity on Saturday, December 20th.

Firing Line’s first dam, Sister Girl Blues, was stakes placed despite the fact she only won two races in her career. She was second in the Hollywood Breeder’s Cup Oaks (G2) and second in the Vanity Handicap (G1) behind the champ Azeri. If we watch Firing Line’s second dam, we can find that Sister Girl wasn’t a great runner, but she produced plenty of winners, including the stakes winner Mint Lane. Finally his third dam produced stakes winners at minor racetracks.

Firing Line has a decent pedigree, but not the Royalty pedigree that everybody is looking for, but if we take a look to the latest Kentucky Derby winners we can notice that most horses do not have blue blood. Their sires weren’t ranked the best. For example Super Saver (Maria’s Mon), Animal Kingdom (Leroidesanimaux), I’ll Have Another (Flower Alley), California Chrome (Lucky Pulpit), and if we look back we surely will find more horses like these.

Firing Line looks like a horse with a bright future in the 2015 season. He’s ready to stretch out and if he can handle the two turns he’ll be very tough in the 2015 Derby Trail.