Golden Soul’s Win Streak At Risk In Buddy Diliberto: After finishing second in the 2013 Kentucky Derby, Golden Soul failed to duplicate or better that placing again in eleven subsequent efforts. His Equibase profile shows ten off the board finishes and one third place finish within a timespan of almost a year and a half. 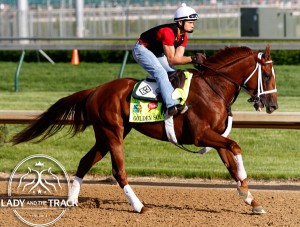 But, something changed, and now he goes for his third straight win on Friday, December 19, 2014 in the featured Buddy Diliberto Memorial Stakes, scheduled at Fair Grounds as Race 7 on turf.

The change began two starts ago in a turf route at Churchill Downs. Golden Soul took his usual position near the back under Robby Albarado, then according to the chart “settled in hand, responded when roused with three furlongs to run, circled five wide into the stretch, shook clear and held safely.”

In Golden Soul’s next start, another turf route at Churchill Downs, once again the former Derby contender settled at the back, “tucked in to save ground, responded when roused with three furlongs to run, moved up swiftly through the second turn, got through every step, took over entering the stretch and drew clear” under Joel Rosario.

For Friday’s race, Brian Hernandez Jr. takes the call and Dallas Stewart remains the trainer. The competition for Golden Soul seems formidable, although inconsistent on paper.

One exception to the field’s inconsistency is Adios Nardo. This gelding recorded nine straight first or second place finishes before his most recent effort, a close fourth at Keeneland. With early speed shown in his past performances, he is expected to contend for the lead early.

Another threat to Golden Soul’s streak comes from Gentlemen’s Kitten, trained by Michael Maker with the successful duo Kenneth and Sarah Ramsey as the owners. Gentlemen’s Kitten’s record shows two wins out of his last ten starts, including a recent eighth place finish in the G3 River City H. at Churchill Downs.

Followers of the previous year’s three-year-old crop may also remember Treasury Bill, a Lemon Drop Kid colt briefly discussed as a Derby contender before finishing eighth in the G2 Rebel Stakes. The Derby path never panned out, and the colt recently transferred to Louie J. Roussel, III’s barn after spending the second half of last year and the entire this year with Wayne Catalano. Like Gentlemen’s Kitten, Treasury Bill only owns two wins out of his last ten starts.

Treasury Bill’s lone start on turf came two months ago and resulted in a 23 length loss at Keeneland.

If the race comes off turf due to rain, the six-year-old gelding Grand Contender projects to attract attention as a horse with only dirt starts on his record. Like Adios Nardo, Grand Contender offers consistency on paper with seven out of eight tries this year resulting in a third or better.

As of Wednesday afternoon, the forecast calls for a 60 percent chance of rain in the New Orleans area.

Free BRIS past performances for the Buddy Diliberto S. can be found at this link