Los Alamitos Futurity 2014 Picks & Plays: The 2014 G1 Los Alamitos Futurity, a race formerly known as the Hollywood from 1981-2006 and the CashCall Futurity from 2007 until last year when the now-shuttered Betfair Hollywood Park closed, will be run for the first time at California Chromes home-town track on Saturday, December 20th. The race is to be contested at 1 1/16 miles with a purse of $500,000 for 2 year-olds. This race produced six Kentucky Derby winners during its span at Hollywood Park and lots of future stars such as Best Pal, Real Quiet, Snow Chief, A.P. Indy, Point Given, Looking At Lucky and the currently running Shared Belief. 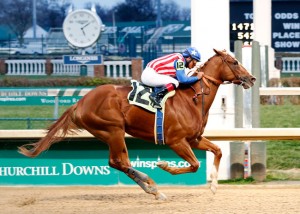 All the eyes will be looking at the Baffert sensation Dortmund (pictured above at Chruchill Downs). This son of Big Brown is unbeaten in two starts and is one of the favorites in the long road to the 2014 Kentucky Derby after his amazing victories.
Credit: Churchill Downs/Reed Palmer Photography

Last weekend we handicapped the Starlet Stakes and one of our top picks Take Charge Brandi nailed it, barely. She fought very gamely till the wire with one of our other top picks Feathered breathing down her neck. My other top pick Maybellene ran a very nice race for third, trailing by a half-length. We nailed the race before where both of our picks hit and the last race my top pick the #9 Irish and Lucky won and Sigi’s alternate top pick, his top 2 scratched, Southern Owah hit for second. Was a great day of capping, just no money to be made. Onward and upward.

I must say I’m a little disappointed in the size of the 2014 Los Alamitos Futurity compared to the 2013 edition, which had 12. I doubt I’ll get any 25-1 odds like I did last year on Candy Boy. With only five entered, the odds aren’t going to be the greatest, so let’s see who we like.

Debuting at Santa Anita 11/2 was the Big Brown colt Dortmund who has looked pretty dominant in his only two races. He won that 6 1/2 F race by a smokin 4 3/4 lengths. Following that up, Bob Baffert sent him across the country to Churchill where he ran in an Allowance Optional Claiming race 11/29, settling off the pace before charging late to pull away and win by 7 3/4 lengths at one mile from post #12. So a combined 12 1/2 length margin win in both races. Scary good but he’s looking at a tough salty field here. We’ll see what this big guy has in the tank Saturday. I also like the Simon Callaghan trained Firing Line who comes in off a win on 11/30 in a Maiden race clocking 6 1/2 F in 1:16.06 at Del Mar in a strong hand-ride. This will be his first time routing and I’m excited to see this Line of David progeny bring it. His sire was awesome and beat Super Saver in the 2011 Arkansas Derby before tanking in the Kentucky Derby that year and never racing again. He’s very interesting to me stretching out and gets Bejarano up the from the outside post.

Thanks Sigi for adding your picks and plays. Good luck to everyone and safe ride.

In the Los Alamitos Futurity (GI), all the eyes will be looking Dortmund, the Baffert sensation. This son of Big Brown is unbeaten in two starts and is one of the favorites in the long road to the 2014 Kentucky Derby after his amazing victories. He’ll be the heavy favorite in this race. However, the promising horse Firing Line will play the role of killjoy. This horse is moving up in class, but he has all the potential to beat the favorite. Also his trainer is pretty confident with him.

Food For Thought: In Race #5 the #5 Brazilian Baccelo, is a horse who knew how to finish second twice behind the superstar Bal A Bali in Brazil. This is his third race in the USA and now looks ready to show all his power. I really like him, so I’m throwing a few buck to win – place on this horse.