Kentucky Derby 2015 Contender El Kabeir Ready To Compete: The Kentucky Derby fever sets in when a young colt starts to show promise in his two-year-old career. Every year, there are dozens of young horses that are their owners’ and trainer’s ticket to Churchill Downs on the first Saturday in May. The Road to the Kentucky Derby begins at Churchill Downs in September with the Iroquois Stakes, which marks the beginning of the points system. Through the Kentucky Derby Prep season, designated races award points of 10-4-2-1 to the first four finishers. The newest colt to make his presence known is El Kabeir, who finally got his graded stakes win in the Kentucky Jockey Club Stakes, boosting his points to 11. The John Terranova trainee is apart of the Zayat Stables, who have made their presence known in the past few years on the Triple Crown trail. 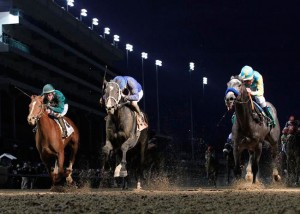 El Kabeir began his career at Saratoga in August in a 5F maiden special weight. He began his career medication free. He finished third in his debut on a fast track. 16 days later, the colt returned in a 7F maiden special weight at Saratoga, but this time, he won. However, from that race on, El Kabeir has received Lasix and seems to have helped him. After his maiden score, El Kabeir has faced graded stakes competition. In his third start, the young colt finished fourth in the G1 Champagne Stakes on a sloppy Belmont track behind Daredevil. Within a month, El Kabeir came back to run in the G2 Nashua Stakes at Aqueduct, but this time, he finished second behind Blofeld, an undefeated Pletcher trainee. For his second start in November, El Kabeir finally received his graded stakes win and more Kentucky Derby points. In the Kentucky Jockey Club Stakes, the colt barely held off Frosted in the 8.5F contest over the Churchill Downs main track.

El Kabeir is bred to be competitive, but he may be distance challenged, as the races get longer. Sired by the Ashford Stud stallion Scat Daddy, El Kabeir could easily excel on any surface. Scat Daddy himself was a threat on the Triple Crown train in his race days. At age two, Scat Daddy won the G2 Sanford, the G1 Champagne, and finished second in the G1 Hopeful. He finished out his two-year-old season in the Breeders’ Cup Juvenile, where he finished fourth. In his sophomore year, the Todd Pletcher trainee finished third in the G3 Holy Bull, 1st in the G2 Fountain of Youth, and 1st in the G1 Florida Derby. This made him a real threat in the 2007 Kentucky Derby, but didn’t take to the mud, or so it seemed, and finished 18th. Later, vets found the colt suffered a slight tendon injury in his right foreleg. The colt could have made a full recovery, but the decision to retire him was made, and he was sent to Ashford Stud to commence stallion duty in 2008.

El Kabeir is out of the unraced mare Grand Venue, but his damsire, Unbridled’s Song was a successful racehorse before he was a successful sire. Unbridled’s Song broke his maiden on debut at Saratoga before being rushed off to graded stakes competition. He finished 4th in the G1 Champagne before winning the G1 Breeders’ Cup Juvenile. In his three-year-old season, Unbridled’s Song was the favorite for the 1996 Kentucky Derby after wins in the Florida Derby (G1) and the Wood Memorial (G1), but finished 5th after suffering a quarter crack in the Wood Memorial that required a special shoe. Finishing out his three-year-old year in a runner-up performance in the Peter Pan and an allowance race, he was given a small break before returning at four to make one start, which he won.

El Kabeir has the breeding to continue his ascent to the top ranks of grades stakes competition, but as far as reaching 1-¼ miles that would be required to win the Kentucky Derby, he is likely to have some trouble. Unbridled’s Song offspring have a reputation for being fragile and only effective up to 9F, or 1 1/8 miles. He did sire Classic winner Will Take Charge, however. Scat Daddy is a young sire, but his offspring have also shown struggle of getting 9F, but has had turf runners win at 9F and further.

El Kabeir has won on the lead and only on the lead. His pedigree is likely to only carry him 8.5-9 furlongs, at best. He, so far, seems one dimensional, and is likely to find shorter distances to his liking, but John Terranova and the Zayat stables both have history with the Kentucky Derby, and both know what it takes to reach Kentucky. Could El Kabeir outrun his classy pedigree and make it the Derby?