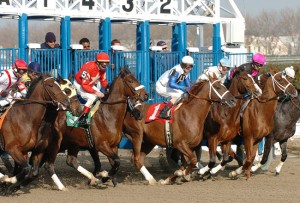 The Jerome Stakes at Aqueduct on Saturday, January 3, 2015 seems tough to handicap leaving most to pick Ackeret (4-1) and El Kabeir (2-1).
Photo: Coglianese/NYRA

The truth is, most profitable gamblers pass races with no clear answer. Because this race is a Derby prep though, a lot of bettors will take their chances. For them, perhaps reading the analysis below will at least help sort out the contenders.

Mini Cosmo and Now We Are Free belong in the first category. Although trainer Graham Motion knows how to win on the Derby trail, Mini Cosmo seems wrong for this race. No recent workouts show on record and his two wins came at lower class racetracks while earning slow speed figures. To win this stakes race, significant improvement is needed. As for Now We Are Free, he looks slow too on TimeformUS speed figures with a 59 earned last time. Those using BRIS might note the 91 figure for the same race.

In the “small chance” group, neither Royal Burgh or General Bellamy show fast speed figures, but they come from elite trainers. Todd Pletcher trains the former, while Bill Mott conditions the latter. Plus, their breeding hints at better races in the future.

Tencendur, Ostrolenka and Nasa fall into the “mild chance” set. Tencendur’s pedigree is filled with precocious influences. His sire Warrior’s Reward consistently gets early winners and the same goes for damsire Hennessy. On the negative side, Tencendur never broke his maiden and gets thrown into a stakes race off an average career debut.

Ostrolenka offers a little more experience and Pletcher trains. His second and third starts ended up fast on BRIS. Why did this Musket Man colt flop by 32 lengths in the G2 Remsen though? Nasa seems more consistent and comes off a stakes win at PARX, yet similar to Mini Cosmo and Now We Are Free his form is unproven at a major league racetrack. Pedigree buffs might note Nasa’s second dam Lotta Dancing won a graded stakes race at a route distance.

That leaves Ackeret and El Kabeir.

Ackeret’s recent allowance sprint win at PARX earned a large speed figure on TimeformUS at 102. Can he duplicate that in a route at Aqueduct? Ackeret’s dam Lady Zieg won a maiden route race on turf to end her career, although sire Mach Ride ran as a sprinter.

El Kabeir ranks as the class horse in this field after winning the G2 Kentucky Jockey Club at Churchill Downs. He starts from the outside post, which could prove troublesome in a two-turn route. Then again, jockey Calvin Borel tends to use aggressive tactics coming out of the gate to get position. Watch last year’s Preakness and the 2013 Kentucky Oaks, where Calvin Borel took out the horse to the left both times.

Just sit back and watch a fun race. If betting the Jerome is a must, then use El Kabeir and Ackeret on top in all wagers (unless they pound El Kabeir to 3/5). If rain occurs, give Ackeret or Nasa a closer look since they both won on wet tracks last time.

Jerome Stakes Has Yet To Produce Kentucky Derby Winner