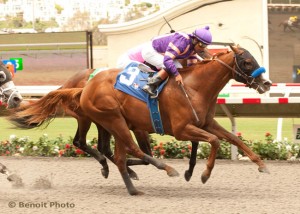 This year, Lord Nelson is among the horses that could start in the G3 Sham Stakes. Lord Nelson is trained by Kentucky Derby winning trainer, Bob Baffert. Bob Baffert trained the Pulpit colt for Peachtree Stable, who, in the past, have campaigned Plum Pretty (Kentucky Oaks winner), Flashpoint (Jersey Shore Stakes winner), Red Giant (Fourstardave winner), and High Cotton (Sir Barton Stakes winner). Lord Nelson is bred to be a competitive horse on the dirt, but has yet to run well against the best of his crop. He broke his maiden on debut, allowing Baffert to enter him in the G1 Frontrunner Stakes, which was won by two-year-old phenomenon, American Pharoah. Lord Nelson would finish a distance fourth behind the top three, which include Calculator and Texas Red.

Lord Nelson would find the winners’ circle again in his third start, when Baffert dropped him to the listed Speakeasy Stakes, which he won in dominant fashion. Baffert obviously believed in his colt. He sent the colt to the G2 Kentucky Jockey Club Stakes at Churchill Downs, but the trip was a rough one of the colt. After bobbling at the start, Lord Nelson was hung seven wide on the far turn before getting up for fifth, which would be far behind El Kabeir and Imperia.

The Sham Stakes is considered another drop for the colt, since he will be going from a grade two to a grade three. However, the colt could easily find the one mile distance to his liking. Lord Nelson is bred to be durable, fast, and distance oriented. While Pulpit only ran until May of his three-year-old season, he was an instant success for Claiborne Farm, winning the Fountain of Youth and the Blue Grass before finishing fourth in the Kentucky Derby behind Silver Charm, Captain Bodgit, and Free House. Pulpit had proven he was a very successful racehorse and sire.

Lord Nelson is out of African Jade, who was unplaced in two starts in France. African Jade, however, is by high quality broodmare sire, Seeking the Gold. Seeking the Gold, while did not finish well in the 1988 Kentucky Derby, he would go on to prove very efficient at Classic distances throughout 1988. He would win the Peter Pan (G1), the Dwyer (G1), and finish second in the Travers (G1) and the Breeders’ Cup Classic (G1).