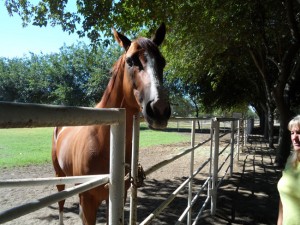 California Chrome, pictured above at Harris Farms back in July with trainer Debbie Winnick, will recive the Vox Populi Award on Saturday, January 10, 2015 at Santa Anita Park.
Photo: Reinier Macatangay

California Chrome’s season started off with a bang, with a California Derby win over Tamarando by an authoritative five lengths. The chart for the race shows Chrome made a three wide bid and drew clear. Moving on to the San Felipe for his next start, Chrome won while racing inside on the lead and by another definitive margin, this time over Midnight Hawk. His next start came in the G1 Santa Anita Derby, and he won impressively again after dueling for the lead in the clear.

The “clear” trip became both his best friend and Achilles heel, as Chrome continued to run well in the clear, but struggled when boxed in as the season continued.

Going for the Triple Crown in the G1 Belmont Stakes, Chrome ran boxed in for the early stages, tipped outside turning for home and failed to sustain the same rally shown in his previous efforts. Also, photos showed an injury to one of his hooves, possibly caused through being stepped on coming out of the gate.

Controversy followed the Belmont loss. Part owner Steve Coburn made comments on national television criticizing the Triple Crown format, suggesting Tonalist’s connections took the “coward’s way out” skipping the first two legs of the Triple Crown. While they sent California Chrome for a vacation at Harris Farms, even more negative publicity came when a dispute between Chrome’s owners and Del Mar became public.

Chrome overcame the drama and retained widespread popularity. After another “boxed in” loss in the Pennsylvania Derby, the Lucky Pulpit colt fired a good race finishing third in the G1 Breeders’ Cup Classic, while running three wide again, and returned to the winner’s circle in the G1 Del Mar Derby on turf almost a month later.

Although fans vote for the Vox Populi winner, the committee makes the final decision. Former Secretariat owner Penny Chenery explains this on the official Secretariat website.

“I envision a democratic process involving a diverse panel of distinguished racing personalities and representatives, from within and outside the industry, working together in unison with the ‘voice’ of the general public.”

Rising legend Wise Dan and Shared Belief were among the other defeated nominees. The website presents no statistics on how many votes each horse attracted.

California Chrome continues to train towards the San Antonio Stakes in February, also at Santa Anita.