East Hall the Pick in 2015 Sunshine Millions at Gulfstream Park

East Hall the Pick in 2015 Sunshine Millions at Gulfstream Park: Early last year, East Hall looked like a chronic loser (in terms of race record) that loved finishing in the money. Besides his maiden win, East Hall’s only other win came via disqualification against Hy Kodiak Warrior in a Nov. 2013 allowance race on this racetrack. 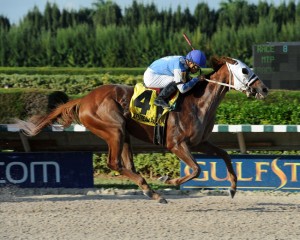 East Hall rates as the slight choice and should receive a nice trip behind the pacesetters in the 2015 Sunshine Millions Classic at Gulfstream Park.
Photo: Leslie Martin, Coglianese Photos, Inc.

The old saying that some horses mature later than others may apply here though. Now the Graeme Hall gelding goes for three straight wins, and as his third win in four starts, in the $250k Sunshine Millions Classic on Saturday. Scheduled for Race 10 at Gulfstream Park, East Hall faces a small field of five other entrants, including a familiar foe that made the Kentucky Derby.

Evidence points to East Hall being a different horse. Wildcat Red, a colt that easily trounced East Hall back in June, suddenly proved no match for East Hall in the Millions Classic Preview S. with no visible excuse. But East Hall’s win two starts ago ranks as the most impressive of the three, as he showed early speed running just half a length off Vicar’s In Trouble before taking over in the stretch and winning by a length. For a horse that ran as a plodding closer before, the race reaffirmed East Hall’s tactical speed ability.

In addition, four starts back East Hall won against the G3 Iowa Derby winner Jessica’s Star in the Ohio Derby.

East Hall rates as the slight choice and should receive a nice trip behind the pacesetters. Jockey Luis Saez takes the mount for trainer William Kaplan.

If East Hall loses, the race becomes open as four out of the five other contenders hold a small chance. Sr. Quisqueyano’s past performances fails to inspire, but he switches to the Peter Walder barn. Maybe that triggers enough of an improvement to step up and win against good horses such as these.

Three post positions to the right, Transparent shows big numbers on the TimeformUS scale including a 110 speed figure in a Belmont allowance race. The five-year-old Bernardini ridgling then flopped in the Cigar Mile losing by 13 lengths. 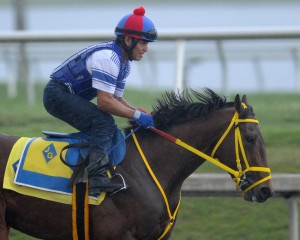 Wildcat Red, pictured above, and East Hall are set to renew thier rivalry in the $250,000 Sunshine Millions Classic on Saturday, January 17, 2015.
Photo: Coglianese Photos, Inc.

Next to Transparent is Wildcat Red, who always runs a determined race at Gulfstream Park. Although many pedigree handicappers questioned his distance ability, the D’wildcat colt ran a good second in the nine furlong G1 Florida Derby, and finished third in the nine furlong G1 Haskell S. and G3 Oklahoma Derby. He handles nine furlongs, but can he turn the tables on East Hall?

On the outside, Catholic Cowboy might end up as a sneaky longshot. The stakes field this newly turned gelding defeated last month rated highly at 108 on the TimeformUS class scale. This race rates as a 106 on the same scale. Another positive comes from Paco Lopez riding, as he just upset two popular horses in General a Rod and Three Alarm Fire on 25/1 shot City of Weston the other day.

With the proper ride, Catholic Cowboy might run in the money. Backwheeling this one underneath in exactas, trifectas and superfectas is a good strategy if looking for a value play.

The “new” East Hall should win with a repeat of his last few efforts. With a good run here, perhaps the improved gelding tackles graded stakes competition again during this meet and turns the tables even more.

The Smarty Jones 2015 at Oaklawn