Looking at the 2015 Smarty Jones Field 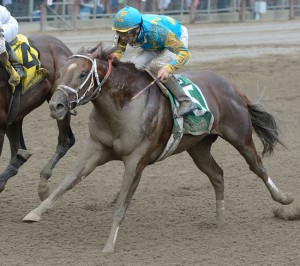 Mr. Z (pictured above) is making his ninth lifetime start in the 2015 Smarty Jones at Oaklawn, which is more than some horses will run their entire lives.
Photo: Chelsea Durand, Coglianese/NYRA

The Smarty Jones is a newer race to the Road to the Kentucky Derby. The race is held annually in mid January for three-year-olds racing for Louisville. This year, a field of nine takes aim at picking up Kentucky Derby points, which will be distributed 10-4-2-1 to the top four horses. Looking at the field, it could be one of the most wide-open races thus far. The race features Kip Deville Stakes and Remington Springboard Mile winner Bayerd, and multiple graded stakes placed Lukas-trainee, Mr. Z. The 8th running of the Smarty Jones is set to take place on Monday, January 19, 2015 at Oaklawn in Hot Springs, Arkansas.

Far Right – This Ron Moquett trainee is looking for only his second win in this listed stakes race. He is facing some decent competition and has never been worse than fourth in six starts. Last out, he was a clear third behind Ocho Ocho Ocho and Mr. Z in the Delta Downs Jackpot Stakes (G3). If he runs the race he did last time out, he could be very tough. Pedigree wise, he is not short on stamina and speed influence.

Paid Admission – This Chris Richard trainee just recently broke his maiden last out at Delta Downs going six and one-half furlongs. The colt is not short on stamina or speed, being by Candy Ride and out of a Vindication mare. However, I believe he could have a tough time against horses such as Bayerd, Mr. Z, Lucky Player, and maybe even Far Right. Will need to run a career best

Mr. Z – This tough guy, trained by D. Wayne Lukas, is making his ninth lifetime start, which is more than some horses will run their entire lives. Mr. Z has finished first only once, but second four times. He most recently finished 3rd in the Los Alamitos Futurity on December 20th. Mr. Z also finished second by a nose in the Delta Downs Jackpot on November 22 just behind Ocho Ocho Ocho. May be able to grab another win here.

American Sailor – This youngster is a late foal of April and has a pedigree to mature quickly and stay mature. By City Zip, the colt is out of Yes It’s True mare and has a pedigree that should get him the 8 furlongs decently, but has not raced against the best competition. He was fourth behind Bayerd in the Kip Deville and has not won passed five furlongs. Look for him to go to the lead.

Hebbronville – In four starts Hebbronville has finished first twice and second once. However, in his last start, the Lynn Whiting trainee did not finish in the Nashua Stakes. After bumping at the start, he was eased in the final furlong. Being stakes placed in the G2 Futurity Stakes to Blofeld, Hebbronville has the pedigree to be efficient at 8 furlongs. He does have speed and will likely be up with American Sailor.

Lucky Player – Since his Iroquois win, Lucky Player has been quite unlucky in his last two starts. He finished 8th in the Breeders’ Cup Juvenile and 7th in the Kentucky Jockey Club Stakes. However, in the KJCS, Lucky Player was cut off coming into the straight and lost all his momentum. With a better trip, Lucky Player is going to be dangerous. With a mix of young and old blood, Lucky Player has the pedigree to be competitive here and further up the graded stakes ladder.

Bayerd – This Steve Asmussen trainee has never been worse than third in his five-race career. Breaking his maiden at Saratoga going six furlongs, winning over Frosed, the colt moved on to win the Kip Deville Stakes at Remington going 6F. He finished second in the Clever Trevor in his first start beyond 6F, but then won the Remington Springboard Mile. He is obviously going to be the favorite with his impressive wins, and collecting his 10 points may be in the cards.

Private Prospect – Making his first start since his 9th place finish in the Breeders’ Cup Juvenile, Private Prospect really has a decent record. He has two wins and a second in four starts. He is a stakes winner and has won at 8F, however, his pedigree suggests he wont be able to go much longer. He does stalk so he may be able to get the jump on some of the speed if it starts to fall apart.

Runaway Bling – This Texas-bred is looking to break a two-race losing streak. He broke his maiden in his fourth start, going one mile on the dirt at Remington. He is bred to be a speedy type, but likes to lull at the back of the pack. He is likely to be the longest shot in the field and would have to better than his best career race to win against this field.

Casey’s Opinion: I am not giving up on Lucky Player quite yet. He was my pick in the Kentucky Jockey Club Stakes until he got cut off and was left with not chance. I think the mile is well within his scope. Looking at Bayerd, his pedigree says a mile would likely be his specialty. Mr. Z is a game horse, but he has race consistently since his maiden score. Can he maintain his competitive form and have the will to win?