Looking at the 2015 Holy Bull Stakes; Picks & Preview: The Grade Two Holy Bull Stakes is named in honor of the Champion of 1994, Holy Bull. While Holy Bull did not win the 1994 Kentucky Derby, this race named in his honor has been a good race to springboard horses into becoming very good horses in their three-year-old year. Previous winners of the Holy Bull include Cairo Prince, Algorithms, Dialed In, Barbaro, Offlee Wild, Hal’s Hope, and Go For Gin (was the Preview Stakes). This year, a field full of potential Kentucky Derby started line up to take a shot at gathering some Kentucky Derby points. The top four finishers will receive points toward Louisville. The points will be distributed 10-4-2-1. The Holy Bull is run at Gulfstream Park on Saturday, January 24, 2015. 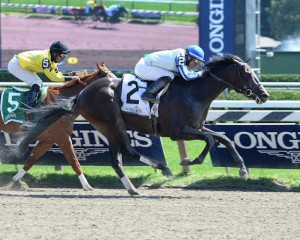 Frosted – This Kentucky-bred son of Tapit was last seen closing in on Leave the Light On in the Remsen, where he was up against the speed-biased track, which benefitted the victor. Frosted is bred to be fast and precocious. His pedigree suggested he could finish well in the 8.5F race, but I would look elsewhere down the road as he stretched out.

Keen Ice – This son of Curlin has not had the best luck in his two graded stakes races, but last out he made a very late move to grab third in the Remsen, earning him two points toward Louisville. His pedigree suggests that the 8.5F is well within in scope and he should improve with added distance.

High Noon Rider – This colt ships in from Remington after finishing third in the Springboard Mile behind Bayerd. His royal pedigree suggests he will be an excellent racehorse, but he may need some more time. The 8.5F should be easily reachable for him. He is a closer.

Bluegrass Singer – Bluegrass Singer is coming into this race on a two-race win streak. He was last seen winning the Mucho Macho Man Stakes at Gulfstream in front-running style. His pedigree suggests the addition 1/16th of a mile should be no problem, but if he starts here, he may need to run a better race than last time.
**Note: He is cross-entered in the Hutcheson Stakes

Juan and Bina – This colt was 5th last out behind Bluegrass Singer in the Mucho Macho Man Stakes, but is still pretty inexperienced. He broke his maiden at first asking at Calder and then finished second in the Smooth Air Stakes before the Mucho Macho Man. His pedigree suggests he should improve as he matures, but against this field, I don’t see him grabbing the win.

First Down – This son of Street Sense is coming in off a fourth place finish in the Nashua. This race would only be his third start. He could use the experience, but with his pedigree, the 8.5F should be an easy distance for him. He did beat Frosted in his maiden score, but since then, hasn’t done much. Should improve here and down the road.

Frammento – This son of Midshipman is coming in off a second place in an Allowance Optional Claiming at Gulfstream to Bluegrass Singer. He has a pedigree that would most likely be suited for the mile, but he may be able to get 8.5F. He is a late runner, but with the look of not too much speed, he may have some trouble.

Upstart – Making his first start since finishing third in the Breeders’ Cup Juvenile, Upstart looks to possibly be the morning line favorite. Pedigree, he is bred to be able to get the 8.5F and some more. This New-York Bred has experience against graded stakes competition and should be one to watch on race day.

Don the Bomb – this Illinois-bred is a duel stakes winner at Hawthorne, winning both the Sun Power Stakes and the Jim Edgar Illinois Futurity. His pedigree is seemingly lacking. His sire was an allowance runner and his dam a claimer. His damsire is Five Star Day, which would give him some speed. Don’t count on Don being a Bomb in the Holy Bull
**Note: Don the Bomb is cross-entered in the Hutcheson Stakes

Decision Day – Decision Day ships in from Woodbine for trainer Josie Carroll. Decision Day is riding a two-race win streak, which his latest win was the Coronation Futurity going 9F on the all-weather track. Bred to be able to get the 9F he has previously run on, he should have no problem with the dirt or the lack of speed in the race, as he likes to be on the lead. He could be one to fly under the radar and grab a piece, if not steal the show.

Casey’s Opinion: This race has some star potential, but with it being at Gulfstream, which normally favors the front end, my picks could be in some trouble. I am not ready to give up on Keen Ice, since he showed a lot against a bias last out at Aqueduct. I think Decision Day could be a horse that the public may not consider, which could be dangerous if he indeed takes to the dirt and takes the field on a ride for the wire. He can wire a field at 9F, so backing up to 8.5F should not be a problem. Also, looking at Frosted and Upstart, these two should have the class the face this field easily.