Weekend Stakes Picks & Plays; Sam F. Davis, Arcadia, Las Virgenes, San Vicente: This week we don’t have any Kentucky Derby Trail races for points. An interesting alternative is the GI Las Virgenes on Saturday, January 31, 2015 at Santa Anita Park, which will offer 10 Kentucky Oaks points for the winner. Even though the San Vicente Stakes G2 does not offer points for the Kentucky Derby, this race marks the return of Texas Red, the Breeders’ Cup Juvenile winner. The Sam F. Davis at Tampa Bay Downs features great horses looking for a spot in the Kentucky Derby, despite the race not awarding points. In addition to the 3-year-old stakes, a good group of milers get together in the G2 Arcadia Stakes. Below you’ll see our weekend analysis and some of our top plays. 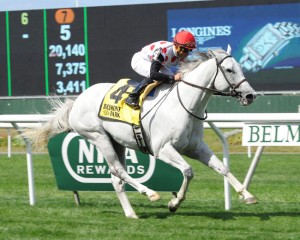 The beautiful Za Approval is tied with Home Run Kitten for the morning line favorite with 3-1 odds in the 2015 Arcadia Stakes at Santa Anita Park.
Photo: Coglianese/NYRA

The Sam F. Davis Stakes is plagued with promising horses, possibly pointing towards the Tampa Bay Derby. There are a lot of horses with a chance to win, but we’re simplifying the race to just three horses. Ami’s Flatter (3) was second in the Mucho Macho Man Stakes in a superb effort. The fact that he moved in class, ran on the dirt for first time, and still came second behind Bluegrass Singer running strong in the stretch is admirable. He’s a horse with tactical speed and the distance would not be an issue. My Jhonny Be Good (9) demolished the field in his last race over 6 furlongs, winning by 14 lengths. Yes, he’s moving up in class, but if you look back to the October 22 race at Keeneland, he finished second just 1 ¾ lengths behind the promising horse Eagle. That race was over 1 1/16 miles, the same distance as this race. Catalina Red (1) is by Munnings, a sire who has produced great runners in this crop. Catalina Red knows Tampa Bay Downs track very well and is on a winning streak. He also can take advantage of the rail. It would not surprise us if they send him to the lead trying to wire the field. In this race
Sigi’s Picks: I’m playing an exacta box 3,9,1. 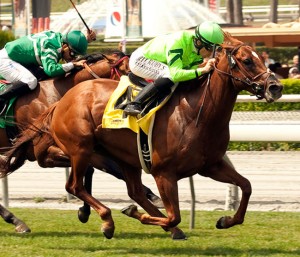 The David Hofmans’ trainee Home Run Kitten heads a competitive field of nine older horses in Saturday’s Grade II, $200,000 Arcadia Stakes at Santa Anita Park, which will be run at one mile on turf.
Photo: Benoit

Kaigun (4) is returning with excellent workouts. In his last race he ran too wide, but that didn’t stop the victory. With a clean trip he will be very tough to beat. Za. Approval (8), the “other” Mark Casse trainee, seems like he lost a step, but he faced tough rivals in the past. In what was a decent effort he finished fourth in the Ft. Lauderdale G2 at Gulfstream Park. That was his first race in Casse’s hands, so he could improve this time around. Baccelo (3) is returning to his favorite surface, the turf. This horse ran amazing races on the turf in Brazil, especially over a mile. Baccelo was second to the super star Bal A Bali, and beat the good miler Maltes in his native Brazil, so the potential is there.
Sigi’s Picks: Looking for some value, I’m playing Bacello (3) to place-show

Las Virgenes Stakes G1 is a prep race for the Kentucky Oaks Championship series. The race offers 10 points to the winner. Majestic Presence (6) has been racing very well, finishing close to the 2-year-old filly Eclipse Award winner Take Charge Brandi. In her last race she gave some ground, however, she tried hard and looked like the winner in the stretch but lost some power in the last ½ furlong. She’s been training very well since that effort and Gary Stevens stays in the irons, which is a sign of confidence. Callback (7) finished really strong in the Santa Ynez G2 in January 3rd. This filly has tactical speed. She can take the lead if the pace is moderate or play the stalker if the pace turns hot. We know it’s her first time around two turns but she has the pedigree to handle the mile. Maybellene (2) is improving race by race. She finished just ¾ lengths behind Take Charge Brandi in the Starlet G1 with great effort. Now with the absence of the aforementioned “Brandi”, she will take advantage of the rail and will try to win gate to wire.
Sigi’s Picks: I have barbaric faith in Majestic Presence (6) so I’m playing her to win.
Casey’s Picks: Maybellene (2), Callback (7), Light The City (10). Boxed. 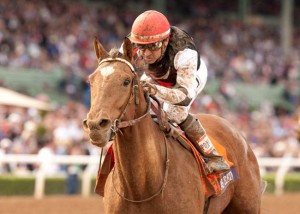 Lord Nelson (1) played the favorite in his last disappointing race that was won by El Kabeir. This horse failed both times he tried two turns. He’s cutting back to 7 furlongs, which is a perfect distance for his running style. Everyone has been waiting for the big and athletic Texas Red’s (4) return. This horse became as a superstar since he crushed the field in the Breeders’ Cup Juvenile. His connections are betting for a different strategy to achieve the main goal, the Kentucky Derby. This race is probably just a prep race pointing to the Risen Star on February 21. He has the quality to beat this field, and considering that a hot pace is expected, the chances increase. Punctuate (5), the popular son of Peppers Pride, astonished the spectators with his powerful run in the stretch. He’s coming from a layoff, but a good race here will put him on the Derby Trail.
Sigi’s Picks: I’m not playing this race but I’m rooting for Texas Red with my heart.