Home » News » Continuing into 2015 with the Older Horses
No Comments

Continuing into 2015 with the Older Horses: Going into the San Antonio, California Chrome was working like a horse that was ready to show his stuff to his competitors once again. While Chrome had a dream trip, Shared Belief decided he would spoil his dream trip by sticking to him instead of lying off like he normally would. Mike Smith hand rode the Candy Ride gelding to a convincing length and a half victory. 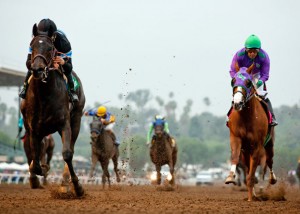 California Chrome was simply not the best horse in the race today and is likely to regroup and train for Dubai, according to plan. While there are many who want to see him stay here and hook up with Shared Belief possibly in the Grade One Santa Anita Handicap. Trainer Jerry Hollendorfer is also considering some races outside of California, specifically in New York.

If Shared Belief were to ship to tracks likes Saratoga and Belmont, he is likely to run into horses such as Wicked Strong, Tonalist, and Palace Malice. If Honor Code stays strong, he could possibly be a horse to answer to this summer as well.

Shared Belief is, for sure, the best horse in the United States right now. He is also the favorite for the 2015 Breeders’ Cup Classic, and this performance validated his ability to compete on the dirt and win convincingly.

As for California Chrome, while the owners want to go to Dubai, I personally want the colt to stay home and try his hooves at another turf race. His numbers are dropping on the dirt and he has lost four dirt races in a row. Could it be that he really has peaked and needs a drop in class? I hope not, as I am a California Chrome fan, but I want to see him back on the grass. His pedigree is favorable for the surface and his style is as well.

Hoppertunity was supposed to be more of a factor but still raced a good race. Hoppertunity proved that he is a notch below California Chrome and Shared Belief. He is likely to regroup and find another spot without those two horses, if Baffert wants the horse to win again.

Bayern was not in the San Antonio due to a minor setback sustained during training. While still on course for the Dubai, Bayern likely needs a prep before shipping overseas. Where he pops up is unknown as of right now, but until then, we will be awaiting to hear the news about him.

The top older horses still remain intact after the Donn and the San Antonio. Shared Belief can easily be considered better than Bayern and most will likely agree that Shared Belief could have won the Breeders’ Cup Classic had it not been for the incident at the start.

The rivalry has officially begun between California Chrome and Shared Belief, now that they have faced each other twice and each has beaten the other. The racing world and fans alike will be anxiously awaiting to see the rest of 2015 and the older horse division. 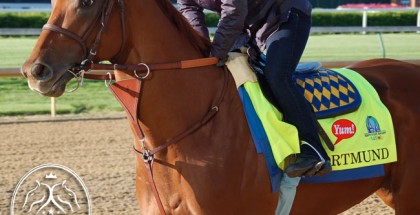