Kentucky Derby 2015 Contender Far From Over

Kentucky Derby 2015 Contender Far From Over: When a colt jumps from a maiden special weight win to a graded stakes and wins impressively over a proven horse, everyone takes notice. This is exactly what happened when Farm From Over won the G3 Withers Stakes at Aqueduct over El Kabeir, the 1-2 favorite. Far From Over took the race by 1-¾ lengths and did so after a disastrous start. After displaying two completely opposite running styles in his two races, Far From Over is hard to analyze in terms of preferred running style. However, if he can use the speed he has with his ability to make one big run, a running style of stalking could easily be the best style to get him into the winners circle again and again. 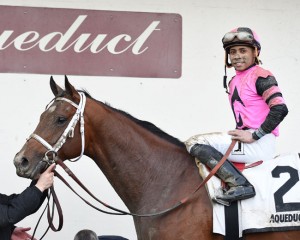 Bred specifically for distance, Far From Over has one of the best pedigrees, if not the best, of any of the horses on the Kentucky Derby trail thus far. Photo: far From Over and Manuel Franco pose in the winner’s circle at Aqueduct. Susie Raisher, Coglianese/NYRA

Bred specifically for distance, the colt has one of the best pedigrees, if not the best, of any of the horses on the Kentucky Derby trail thus far. By the 2010 Eclipse Award Champion Older Male, Blame, Far From Over has not only 10F influence on his sire’s sire, but also his dam’s side. Out of Alchemist, a stakes placed daughter of A.P. Indy, Far From Over also has 12F influence on his dam’s side. This means that Far From Over is inbred to multiple highly influential bloodlines, including Northern Dancer (1964 Kentucky Derby winner), Alydar (1973 Triple Crown series runner up), Raise a Native (1963 Two-Year-Old Champion Male), Buckpasser (Five-Time Champion), and Secretariat (Two-Time Horse of the Year, 1973 Triple Crown winner). One very important horse that Far From Over is inbred to is the highly influential blue hen mare, Courtly Dee.

Courtly Dee was a daughter of the 1962 Champion Juvenile Male, Never Bend, who became a successful sire. Out of the War Admiral mare, Tulle, Courtly Dee was not a highly successful racehorse. She was once bought for a $15,000 claim, before going on to lose three more times. After being retired by owners Lee Eaton and Leo Waldman, Courtly Dee became a breed changer, in a sense.

Courtly Dee would also reach the heights unexpected of her when she was named the 1983 Broodmare of the Year. Helping win this title was her daughter Althea, 1983 Champion Juvenile Filly. In her time, while none of her sons became successful in the breeding shed, ten of her eleven daughters became stakes producers.

In relation to Far From Over, Courtly Dee is found on the distaff side in both his sire line and his distaff line. Courtly Dee produced the Alydar filly Althea, who went on the produce Aurora, by Danzig. Aurora was a graded stakes placed filly but is best known for producing Arch (Kris S). From there, Arch sired the champion Blame, who then sired recent Withers Stakes winner, Far From Over. Courtly Dee also produced the grade two winning mare, Aishah, produced Aldiza, who won the G1 Go For Wand Handicap in 1998. Aldiza produced Alchemist, who never lived up to her pedigree, but has now produced Far From Over, a grade three stakes winner.

Far From Over is not only bred from royal blood, but from a long, long line of champions. While his pedigree suggests he’ll take his time in maturing and growing, it also suggests that he is going to be a very good racehorse for as long as he is in training and fit to race. As for the Kentucky Derby, he is bred to run all day and be able to be precocious with his speed and carry it. He has ten points toward a spot in the starting gate and connections hope to gain fifty more if and when Far From Over wins the Gotham, his next anticipated start. If all goes well, a start in the Wood Memorial is expected before shipping the Louisville for the running of the 141st Kentucky Derby.