Ride On Curlin Aims For Route Win in Essex at Oaklawn

Ride On Curlin Aims For Route Win in Essex at Oaklawn: When popular former Kentucky Derby contenders run in subsequent races, the public tends to overvalue their win chances because they ran in the Derby. Being a famous horse results in attracting attention at the windows, no matter how the form looks. 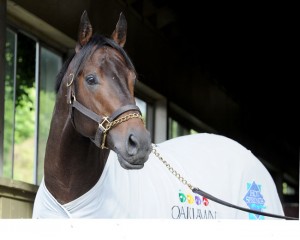 Ride On Curlin (pictured above) holds a good chance to win the Essex H. at Oaklawn Park on Saturday, February 14, 2015 despite not owning a single route win!
Photo: Chelsea Durand, Coglianese/NYRA

With the above warning in mind, Ride On Curlin holds a good chance to win the Essex H. at Oaklawn Park on Saturday, despite not owning a single route win!

Some of those route distance losses came against quality horses, including the third to Hoppertunity and Tapiture in last year’s G2 Rebel on this racetrack. Hoppertunity became injured before the Derby and went on the shelf, but recently won the G2 San Pasqual at Santa Anita and G1 Clark at Churchill Downs. Tapiture finished second to Goldencents in the Breeders’ Cup Mile.

After the Rebel, Ride On Curlin finished second in the G1 Arkansas Derby, finishing ahead of Bayern, the eventual winner of the Breeders’ Cup Classic.

Two races after the Arkansas Derby, Ride On Curlin only lost to reigning Horse of the Year California Chrome in the Preakness. The third place finisher Social Inclusion placed in the G1 Wood Memorial before, and further down the chart Bayern finished ninth and top filly Ria Antonia ended up tenth.

From a class standpoint, Ride On Curlin seems imposing. But, the son of Curlin is not invincible. Although Ride On Curlin’s sire obviously gives distance influence, his bottom side signals sprinter. Check out the races that Ride On Curlin’s dam Magical Ride and sibling Fanfare won.

The most logical alternative, Golden Lad, comes off a fifth place finish in the G3 Hal’s Hope at Gulfstream Park. Lea won that race, and then finished second in the G1 Donn. In addition, Todd Pletcher tends to improve horses quite a bit in their second start off a layoff. From the outside No. 8 post position, expect jockey Ricardo Santana, Jr. to ask Golden Lad to clear early in this two-turn route race.

As for other win contenders, the options become slim. Code West recently ran second against Carve in an ungraded route stakes on this racetrack last month. While needing luck and a decent trip, a win is possible. The Lemon Drop Kid ridgling starts from the No. 4 spot, and owns back class as a former graded stakes winner.

To the left in the No. 2 post, the four-year-old Tiz Wonderful gelding Rocket Time sports a 6-4-0-1 record and will attempt a theft under Calvin Borel. The problem is, other speed exists including the aforementioned Golden Lad and the two horses surrounding Rocket Time, Joy Boy on the rail and I Got It All. Ride On Curlin possesses early foot too, if jockey Jon Court decides to utilize his speed.

Perhaps not a win candidate, Joy Boy deserves mention nonetheless for winning two races in a row, with his November win at Churchill Downs in an optional claimer coming after dueling three wide through fast fractions, a difficult task to pull off.

Pay attention to the show pool and see if Ride On Curlin attracts bridgejumpers (those who bet a large sum of money to show on a single horse). In that situation, a show bet on Code West might result in a decent payoff, assuming Code West hits the board and Ride On Curlin fails to break the top three.

Otherwise, Ride On Curlin and Golden Lad stand as the most logical win options and bettors must include them in all other wagers. 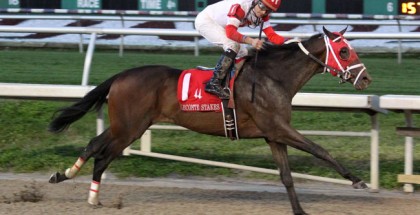