Home » News » Itsaknockout Prepares for 2015 Fountain of Youth
No Comments

Itsaknockout Prepares for 2015 Fountain of Youth

Itsaknockout Prepares for 2015 Fountain of Youth (Gulfstream Park Press Release): Undefeated 3-year-old Itsaknockout turned in his final breeze in preparation for a start in next Saturday’s $400,000 Besilu Stables Fountain of Youth (G2) Sunday morning at Palm Beach Downs, breezing four furlongs in company with maiden winner Khozan. The two Todd Pletcher trainees were clocked in 48.80 seconds, the ninth-best of 18 works at the distance. 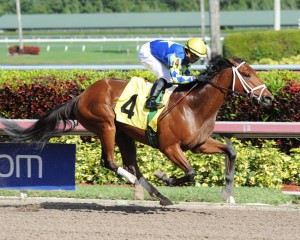 Itsaknockout, owned by Starlight Racing and trained by Todd Pletcher, has been training according to plan as he prepares for the Besilu Stables Fountain of Youth at Gulfstream Park on Saturday, February 21, 2015.
Photo: Lauren King, Coglianese Photos

“I thought he breezed well,”Pletcher said of Itsaknockout. “Pretty much everything has gone according to plan since his allowance win.”

Itsaknockout, a son of Lemon Drop Kid, is a perfect two-for-two in his career after posting back-to-back victories over the Gulfstream Park oval this winter. In his career debut on Dec. 7, the colt put his grit on display, prevailing in a stretch duel and holding off a late surge from stablemate Old Mountain Lane to score a nose victory. Exactly a month later, the bay returned to blow away his rivals in an allowance, rolling home by a widening 5 ¼ lengths on Jan. 4.

“We were hoping [to see a performance like that], based on the way he trained,” Pletcher said, reflecting on the allowance win. “We thought he would run well. It was every bit as good as we’d hoped for.”

Pletcher said since that race, Itsaknockout has developed physically, but he has always had a good mind. Those qualities will be put to the test when the Kentucky-bred makes his stakes debut Saturday.

“I think he’s developed well physically,” he said.“He’s done well mentally. He’s always been a straightforward horse. He’s gotten a little bit bigger and stronger. He’s actually gained weight since his last race. He’s a pretty easy horse to train. He does whatever you ask him to do. He’s push button to that point. This will be the class test that will kind of define where he is.”

The 1 1/16 mile Fountain of Youth will be Itsaknockout’s debut around two-turns, but the colt is bred to go the distance. Lemon Drop Kid won the 1999 Belmont Stakes (G1) at 1 1/2 miles.

“I’m not concerned about the distance at all,” Pletcher said.

Several other Pletcher trainees turned in works Sunday in preparation for starts at Gulfstream next Saturday, a day that will feature eight stake races, seven of them graded.

Divine Oath, winner of the W. L. McKnight (G3) at Gulfstream in his last start on Dec. 27, breezed four furlongs in 48.91 seconds and is set to go in the Mac Diarmida (G2). Eskenformoney and Enchantress, Davona Dale (G2) contenders, were both timed in 49.22. Jack Milton, on track for the Canadian Turf (G3) and Got Lucky, a Rampart (G3) probable, posted the co-bullet works of the day, covering the same four furlongs in 48.41 seconds.

The Besilu Stables Fountain of Youth takes place at Gulfstream Park on Saturday, February 21, 2015 and is worth 50 Derby Trail points for the first place finisher.