Home » News » A Loaded Field for the 2015 Davona Dale: Casey’s Picks
No Comments

A Loaded Field for the 2015 Davona Dale; Casey’s Picks: Davona Dale won two Triple Crown Series. While she did win the Kentucky Oaks and the Black Eyed Susan, she also won the Acorn, the Mother Goose, and the Coaching Club American Oaks. Davona Dale was not as successful in the breeding shed as she was on the racetrack, but her legacy lives on through the top colt Hoppertunity. 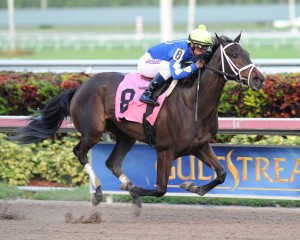 An impressive two-time winner at the Championship Meet already this winter, Eskenformoney steps up into stakes company for the first time in Saturday’s 28th running of the $200,000 Davona Dale (G2) at Gulfstream Park on Saturday, February 21, 2015.
Photo: Lauren King, Coglianese Photos

The Davona Dale has not been a hot preparatory race for a filly looking to win the Kentucky Oaks, failing to produce a winner since its inauguration in 1988. However, many winners of the race, including Christmas Kid, Wait a While, Sis City, and Yell all went on to win graded stakes, including grade one races. Wait a While was even voted the 2006 Champion Three-Year-Old Filly. The race has been run at three different distances but is currently run at 1-1/16 miles on the main track at Gulfstream Park in Hallandale, Florida.

The Davona Dale is the first race that is worth 50 points to the winner of the race on the Road to the Kentucky Oaks for three-year-old fillies. The following three finishers receive 20, 10, and 5 points, respectively. The race is set to go off on Saturday, February 21, 2015.

Lassofthemohicans (Indian Charlie – Dream Street, by Tale of the Cat) This filly has never been worse than second in any of her five starts but only has one win. In two of those starts, fellow entrant Birdatthewire defeated her. This filly’s lone win came when she was allowed to run alone on the front end. She is likely not going to get that easy of a trip with the deeper competition here.

Eskenformoney (Eskendereya – But the Money, by Not for Love) Finally finding her way to the wire on a dirt course, this young filly from the first crop of Eskendereya is riding a two-race win streak. She is ripe to take the next step up here. In her last two starts, she has managed a good pace while pressing or stalking and was able to make her move and win. Her pedigree is distance-oriented, and she should be able to take this next step rather easily.

Jacaranda (Congrats – Baffled, by Distorted Humor) This half-sister to Constitution is bred along the same lines as her older brother: Congrats is a son of A.P. Indy, whereas Tapit is a grandson of A.P. Indy. This filly is also coming into this race on a two-race win streak. In her last start, she won the Grade 3 Tempted Stakes. Her pedigree suggests that the extra half-furlong that is added here will be no problem, and she has the talent to claim victory. She also prefers to be on the lead.

Birdatthewire (Summer Bird – My Limit, by Wagon Limit) Finally finding her running legs in her last two starts, this daughter of the late Summer Bird should have absolutely no problem to continue stretching out and is likely the filly to beat here. She is a closer, and, if the pace is honest, she has a chance to duplicate her winning form.

Skipalute (Midnight Lute – Skipstone, by Montbrook) While pedigree suggests she’s a sprinter, this filly has been able to stretch out a bit and place in two graded stakes, including a finish in the Delta Downs Princess behind Take Charge Brandi. However, this filly has never won a race of her own. In her last race, the Forward Gal Stakes (G3), she was eased in the lane and did not finish the race. Can she step it up here? Her running style seems to be one of pressing the pace; however, she has been on the lead before, finishing second in that particular race.

Puca (Big Brown – Boat’s Ghost, by Silver Ghost) Last seen finishing sixth in the Breeders’ Cup Juvenile Fillies, Puca has been working very well at Payson Park Training Center in Florida for trainer Bill Mott, and hopefully she has improved both physically and mentally. Puca likes to sit right off the leaders before making her move. In the Breeders’ Cup, she was unable to get the distance, which might have accounted for her sixth-place finish.

Distinta (Summer Bird – Miss Kitty, by Storm Cat) In her maiden score, which came in her third start, Distinta was able to sit right behind the leader and come home a winner by ¾-lengths. In her previous start, she was only able to muster a sixth-place finish in the Grade 3 Forward Gal won by Birdatthewire. Her poor finish is likely a result of a horrid trip where she was blocked, checked, and angled out without success. The notes on the race state that she “finished willingly when clear.” Could a good trip here get her home first?

Silverpocketsfull (Indian Charlie – Unforgotten, by Northern Afleet) In three starts, this filly owns a first, second, and a third with her win coming when she closed from far back to win a maiden special weight over Forever Unbridled (my pick for the Rachel Alexandra). In her last start, she finished second behind Eskenformoney going one mile at Gulfstream. This filly’s pedigree seems good for the 8.5 furlongs, but, moving forward, I think she will be endurance-challenged.

Enchantress (Malibu Moon – In the Ghetto, by Hennessy) In four starts, this filly has two wins. In her other two starts, which came in graded stakes company, she finished well off the board in fifth and eighth. Her most recent start resulted in the eighth-place finish in which she “dueled for the lead between foes and weakened after going a half.” Her pedigree states that this filly will probably prefer the shorter distances, supported by the fact that both of her wins have come at six furlongs. She likes the lead and will help set the pace for the later runners.

Ekati’s Phaeton (Tale of Ekati – Seventh Veil, by Capote) Bred well for the 8.5 furlong distance, Ekati’s Phaeton has never won past six furlongs. In her last start, the Forward Gal, she faded to fourth after attempting to lead throughout, faltering and losing position at almost every pole. She has been working well at Gulfstream and seems to enjoy the track. Can her speed hold or will she be battling before fading again?

Danessa Deluxe (Summer Bird – Belle’s Home, by Came Home) With a pedigree for distance, this filly has two wins in five starts. She was last seen finishing fourth in the Delta Downs Princess Stakes. She likes to close in the lane and should be able to get a good pace to run at here. Her pedigree is a bit more of a late-maturing one, so she should be able to successfully make the transition between two and three.

Cavorting (Bernardini – Promenade Girl, by Carson City) This filly skipped the Breeders’ Cup after finishing a lackluster seventh in the Frizette Stakes. Coming in as a fresh three-year-old, Cavorting has a pedigree that is more late-maturing than precocious, so she should also be able to make a smooth transition from two to three. Her works have not been sizzling but have been enough to get her into shape and ready for a race. She likes to be on the lead, which will help this pace along for late runners.

Genre (Bernardini – French Park, by Ecton Park) With a pedigree very well-oriented for distance and speed, this filly should be able to mix right in with the quality field here. She has a win and a second-place finish in her three-race career. In her three-year-old debut, she was beaten as the favorite in an allowance at Gulfstream going one mile on the dirt. Genre likes to press the pace but was able to close for second in her debut as a juvenile. She is likely to sit off the true speed and will hopefully get the first jump for victory.

Money’soncharlotte (Mizzen Mast – Something Wicked, by Chimes Band) Last time out this filly was able to grab third in the Silverbulletday Stakes. She has won a listed stakes at Gulfstream Park West (a.k.a. Calder) and took that field gate-to-wire. This Mizzen Mast filly likes the lead and will likely fight to be on it. In the Silverbulletday, she was third for the whole race, but in all honesty, that field stayed pretty much the same the entire race with no one catching I’m a Chatterbox that day. With all due respect to the connections, this filly may be more suited for dirt sprints or turf races.

Casey’s Opinions: With a full field of fourteen with at least five fillies who are fast out of the gate and like the lead, this race is shaping up for the late runners such as Birdatthewire and Danessa Deluxe. Birdatthewire is the filly to beat coming into this race. She has stamped herself as a prominent Kentucky Oaks contender, and this race is likely to set up for her late kick. Danessa Deluxe may not be on many people’s radar, but her pedigree and running style suggest she will get better with distance and age. She hasn’t been seen since a fourth-place finish in the Delta Downs Princess behind Take Charge Brandi, but maybe the bullring wasn’t to her liking and she can improve this time around. Distinta likes to stalk the pace, and with a lot of speed looking to burn, this daughter of Summer Bird could easily get first jump on the late runners and hold them off through the late running if the pace sets up how I think it will. Jacaranda is a front-runner, but what I like about this one is that she is likely the one out of all the front-runners to be able to hold her speed for the required distance. Eskenformoney took a while to find her running legs and her winning style, but now she knows how to manage both. I love her pedigree, and she seems to have found a home at Gulfstream on the main track. Can she step it up here and go the extra distance?

Casey’s Picks: Birdatthewire singled for the win. I also will do a Birdatthewire/Danessa Deluxe/Distinta/Jacaranda/Eskenformoney, Super Box 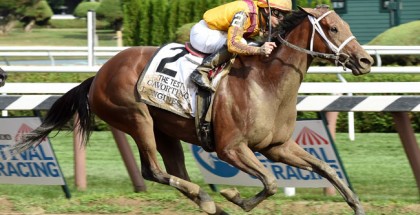