Kentucky Oaks 141 Contender Condo Commando Charges Toward Louisville: Ashado was the last filly to win both the Spinaway (G1) and the Demoiselle (G2) before going on to win the Kentucky Oaks (G1) at age three. This year, one filly is hoping to replicate Ashado’s feat: Condo Commando. 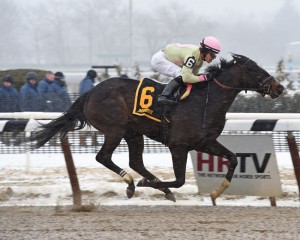 Condo Commando, pictured above at Aqueduct, is leading the contenders on the Road to the Kentucky Oaks with a current stock of 61 points toward a starting position in the Oaks field of fourteen.
Photo: Susie Raisher, Adam Coglianese/NYRA

Condo Commando is leading the contenders on the Road to the Kentucky Oaks with a current stock of 61 points toward a starting position in the Oaks field of fourteen. The daughter of young sire Tiz Wonderful, whose third crop of offspring consists of three-year-olds this year, is nearly perfect in her career with four victories in five total starts. The filly jumped right from her maiden score to grade one company, winning the Spinaway at Saratoga over fillies By the Moon and Angela Renee over an off track.

Pedigree shows that Condo Commando is not lacking in the bloodlines department and should be able to continue to stretch out in races, such as the 1-1/8 miles Kentucky Oaks. Sired by Tiz Wonderful, she has both the agility and stamina in her breeding to be effective in any style of race.

Tiz Wonderful was an impressive, albeit fragile, horse during his racing days. In his first three starts, Tiz Wonderful won his debut, the Iroquois Stakes (G3), and the Kentucky Jockey Club Stakes (G2) before succumbing to his weakness: his tendons. The colt came out of the Kentucky Jockey Club Stakes after defeating Any Given Saturday with a rapped front right tendon. This sidelined the colt for nearly a year. He finally returned in the 2007 Jim Dandy but failed to show any interest in running, finishing last. Two months later, the Tiznow colt finished a strong second in the More Than Ready Stakes at Belmont Park, but he was afterwards vanned off the track after showing more signs of injury. He exited that race with another suspensory injury, this time in his right hind leg. It was then decided that Tiz Wonderful was finished with racing. He was retired to Spendthrift where he stood until he was purchased by Korean Racing Authority, ending his stud career in the United States.

Not only is Condo Commando’s sire a multiple graded stakes winner, but her dam Yearly Report can also attest to some success. In 2004, Yearly Report was a three-year-old filly in the hands of Bob Baffert. This daughter of General Meeting never collected a grade one win, but she did win multiple graded and listed stakes as a three-year-old. Yearly Report had a four-race win streak that began in the Santa Ynez Stakes (G2) and ended when she finished fourth in the Alabama Stakes (G1). In the time between, Yearly Report won the Melair Stakes (L), the Black-Eyed Susan Stakes (G2), and the Delaware Oaks (G2). Following her streak-ending defeat in the Alabama, she ended her 2004 season with a win in the Stonesider Stakes (L). In her only start as a four-year-old, the filly finished an uncharacteristic sixth in the Sunshine Millions Distaff. Later, the filly was found to have an injury, so she was promptly retired and booked to Gone West.

Yearly Report’s sire General Meeting was of royal blood but was a slight disappointment to some. A son of Seattle Slew and out of an Alydar mare, the colt was expected to be a success. While he did win the Volante Handicap (G3), he was never able to accomplish even half of what his family had achieved. While he was consistently in the money at age two, he tailed off and failed to show that he was anything spectacular.

Condo Commando recently won the Busher Stakes (L) at Aqueduct over a questionable field. While she has defeated promising fillies like Angela Renee and By the Moon, one may continue to question how good she is.

Condo Commando is an effortless mover with a beautiful stride. No action is wasted as she strides out, and she does not paddle but runs straight as an arrow. This filly’s lone defeat was and is a mystery but is now behind her. Skipping the Breeders’ Cup likely helped this filly with her transition from age two to three, and now she is on her way to Louisville, likely with one or two more prep races intended to get her ready to erupt out of the hopeful Oaks starting gate.