Newcomers Chase Derby Points in 2015 Gotham Stakes at Aqueduct: When the average person hears the word Gotham, they are likely to think of Bruce Wayne and his city, Gotham City. However, when a racing fan hears the word Gotham, they automatically begin to consider Aqueduct’s Grade III race that serves as a popular Kentucky Derby prep for three-year-old colts and geldings. 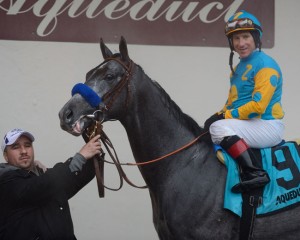 The Gotham Stakes is run annually at the New York track over 1-1/16 miles and serves as an opportunity for young horses to secure a spot in the starting gate of the Kentucky Derby. In years past, horses such as Stay Thirsty, I Want Revenge, Hansen, and Samraat have all won the Gotham Stakes in hopes of expanding their careers to Louisville. Of those colts, I Want Revenge was most successful in becoming the morning-line favorite for the 2009 Kentucky Derby before being scratched due to health concerns.

History recognizes that the Gotham can act as a big stepping stone in a young horse’s career. Several horses have gone on to win major races after scoring in the Gotham. In 2000, Gotham victor Red Bullet defeated Derby winner Fusaichi Pegasus in the Preakness Stakes. In the 1992 edition of the Gotham, Lure and Devil His Due finished in a dead heat which seemed to spark their respective careers. Lure eventually became a two-time winner of the Breeders’ Cup Mile, whereas Devil His Due won multiple Grade I events on the dirt, including the Wood Memorial, Pimlico Special, Whitney Handicap, and the Suburban Handicap. Other horses, such as Easy Goer, Private Terms, Gone West, Secretariat, Dr. Fager, and Native Dancer, all won the historic race early in their careers.

This year’s Gotham Stakes will be run on Saturday, March 7, at Aqueduct. The race is ninth of a ten-race card, and post-time is expected to be at approximately 4:50 p.m. ET.

Combat Driver (Line of David – Safe Journey, by Flatter) – This colt hasn’t fared well in stakes competition and has no more than a maiden score to his credit.  In his graded stakes debut, the colt finished a dismal tenth in the Remsen Stakes (GII). As a result, his class is questionable. While the colt has been training very well for trainer Gary Contessa at Belmont Park, he is likely to be a longshot just trying to procure a piece of the trifecta.

Dontbetwithbruno (Tiz Wonderful – Stomping, by Dixieland Band) – Last time out, this colt was a winner, adding a single victory to his three-race career. While he broke his maiden going the exact same distance on this same track, this colt will have to step it up if he wants to contend with fast colts like Classy Class and El Kabeir. This one likes to press the pace in hopes of wearing down the leaders in the stretch. Look for him up close to the pace. *Note: Never count out Pletcher and Repole.

Classy Class (Discreetly Mine – Collegiate, by Saarland) – I am still not convinced this colt wants the distance that McLaughlin keeps asking of him. He always seems to hang in there but never by enough to keep his head in front. In the Withers, he and El Kabeir were easily passed by Far From Over, a colt who seemed to lose the race when he stumbled out of the gate but still managed to win. He’ll be up close and probably leading the field into the stretch.

El Kabeir (Scat Daddy – Great Venue, by Unbridled’s Song) Not sure this colt will want more than the distance he’ll be running here, but he is the obvious favorite for this race. Some say he had an excuse for his poor run in the Withers in doing the dirty work and wearing down Classy Class, but El Kabeir should not have been passed so easily. Is the colt tired? Is he reaching his distance limitation? Whether the answers to such questions are yes or no, look for him to run his heart out over a track he clearly likes.

Lieutenant Colonel (Colonel John – Lovely View, by Carson City) With so much speed on the bottom of his pedigree, it makes me wonder how far he really wants to go. While Colonel John was effective at longer distances, the Carson City line will counteract that quite a bit. Coming in on only a maiden win, this colt needs to step up big time. He is trained by Chad Brown, a very effective trainer with horses of all ages and surfaces. Look for this one to be up close if he’s not on the actual lead.

Tiz Shea D (Tiznow – Ender’s Sister, by A.P. Indy) – With that pedigree, you can only hope he lives up to half of what his family did. This colt is coming in off a maiden score as well in which he won at 5-½ furlongs at Parx for trainer Bill Mott. The colt has a late running style, and, with the speed already recognized in this race, this one could easily be an upset! His works have been very good, and he seems to have unlimited potential.

Toasting Master (Congrats – Broadway Gold, by Seeking the Gold) – This West Point Thoroughbreds colt has two wins in five starts, both of which came at Churchill in a maiden special weight and an allowance optional claiming event. With a pedigree that suggests the distance here should be no problem, he has yet to show his ability beyond sprint distances. If he can step it up, it wouldn’t be a surprise to see him outrun his competitors here, but he has to bring his A++ game.

Uninfluenced (Indian Charlie – Just a Jingle, by Unbridled’s Song) – This colt has yet to break his maiden but was very close last time when he traveled a mile over the inner dirt course at Aqueduct. With a pedigree that seems to be just right for this distance, the colt is trained by the legendary Todd Pletcher and owned by Mike Repole. This colt is apparently showing enough to Pletcher to warrant a start here instead of attempting an easier spot where he could break his maiden.

Tencendur (Warrior’s Reward – Still Secret, by Hennessy) – Last seen finishing fourth in the Grade III Withers, this colt has recorded two bullet works since that last start a month ago. His pedigree has speed on bottom and some stamina on top, which I would rather see switched. This colt could hang on for a piece of the pie, but in terms of winning, I would recommend looking elsewhere.

Blame Jim (Sharp Humor – Tamboorensnshampan, by Deerhound) – Claiming a pedigree with an unfamiliar distaff side, this colt broke his maiden at Saratoga last summer going 5-½ furlongs over the main track in which he defeated Derby prospect Bold Conquest in wire-to-wire fashion. Finally returning to the races on February 8, the colt was second to Stanford in an allowance at Gulfstream. He seems to like lying close to the lead if not directly placing himself on it, so he is going to have to contend with multiple other speed horses. *Note: Deerhound is out of Lassie Dear (Buckpasser) who is the granddam of Summer Squall, A.P. Indy, and Lemon Drop Kid.

Casey’s Opinions: El Kabeir is looking really good in this race. He is the only graded stakes winner in the field. However, looking elsewhere would be my preference. Tiz Shea D looks enticing due to all the speed that seems signed on for this race. His closing kick is likely to get him on the board to defeat more than half, if not all, of this field. Blame Jim seems to have done nothing wrong in his two-race career. Breaking his maiden at Saratoga is an accomplishment in and of itself, and finishing second to promising colt Stanford after a long layoff is another achievement to his credit. While he is a member of the large group that likes the lead, his pedigree becomes more appealing the more I look at it.