Untapable Ready to Tap into Four-Year-Old Success: Racing folks have been patiently awaiting the return of 2014 Champion Three-Year-Old Filly Untapable in this weekend’s Azeri Stakes (GII) at Oaklawn. The now four-year-old bay filly with the short blaze will likely be the favorite in the race, and, if she runs according to her prior form, she should fulfill all expectations of victory. 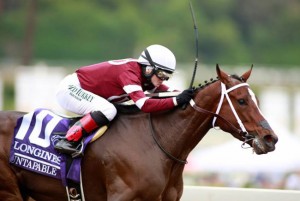 In the final start of her sophomore year, Untapable edged clear under a long drive to win the Distaff by 1-1/4 lengths over such highly ranked fillies as Don’t Tell Sophia, Iotapa, Ria Antonia, Unbridled Forever, Tiz Midnight, and Close Hatches. That incisive conquest in addition to her previous performances led to a unanimously decided Eclipse Award for Untapable as the 2014 Champion Three-Year-Old Filly. Breeders’ Cup Photo ©

Bred and owned by Winchell Thoroughbreds LLC, Untapable debuted as a juvenile in a 5-1/2-furlong maiden special weight event and won by a length in leading fashion. She then jumped into stakes company, stretching out and winning the 1-1/16 Pocahontas Stakes (GII) at Churchill Downs. The young filly was then subjected to a calamitous ride in the Grade I Breeder’s Cup Juvenile Fillies. Untapable raced five-wide early, and around the second turn she was forced to check to avoid a spill near her, causing her jockey to ultimately ease his mount to finish in eighth place behind winner Ria Antonia. Success again eluded Untapable in the final start of her juvenile career in the Hollywood Starlet Stakes (GI) in which she finished a strong third.

Hooking up with partner Rosie Napravnik for her three-year-old season, Untapable returned to the racetrack with sole intentions of domination. The filly’s first victory came in the February Rachel Alexandra Stakes (GIII), a race amongst other top fillies whom Untapable dominated by a margin of 9-1/2 lengths. She then remained in Louisiana to participate in the Fair Grounds Oaks (GII) in preparation for a run in the Kentucky Oaks (GI). Untapable again eclipsed her competition, beating a field that included the highly regarded fillies Fiftyshadesofgold and Unbridled Forever by 7-3/4 lengths under a hand ride.

The improving filly entered the Kentucky Oaks as one of the favorites, and by the end of the race she had cemented her superiority over her cohorts. Tracking four-wide for most of the race, Napravnik guided Untapable to a 4-1/2 length victory over an excellent group of three-year-old fillies.

The female powerhouse duo was not content with the Oaks blanket of lilies. Traveling to Belmont Park for the June edition of the Mother Goose Stakes (GI), Untapable was subjected to a troublesome ride in which she was forced in by another horse and rubbed shoulders with recent graded stakes winner House Rules. Despite those nuisances, the skillful filly moved outside and managed to win by an expanding 9-1/4 lengths.

As eventually happens for many good female runners, connections and trainer Steve Asmussen decided to next enter their star filly in the Haskell Invitational Stakes (GI) against males. Following the break, Untapable was bumped, and after a four-wide run lacking any sort of bid, the filly finished fifth in Bayern‘s race.

Turning back to racing against her own gender, Untapable won the Cotillion Stakes (GI) by a decisive length in preparation for a run in the Breeders’ Cup Distaff (GI). In the final start of her sophomore year, Untapable edged clear under a long drive to win the Distaff by 1-1/4 lengths over such highly ranked fillies as Don’t Tell Sophia, Iotapa, Ria Antonia, Unbridled Forever, Tiz Midnight, and Close Hatches. That incisive conquest in addition to her previous performances led to a unanimously decided Eclipse Award for Untapable as the 2014 Champion Three-Year-Old Filly.

As a daughter of 2014 Leading North American Sire Tapit, there were great expectations for Untapable. Tapit had a brief career on the track, but he did win the Laurel Futurity Stakes (GII) as a juvenile and the Wood Memorial Stakes (GI) as a three-year-old. He has been exceedingly successful as a stallion, siring last year’s Belmont Stakes (GI) winner Tonalist and multiple graded stakes winner Tapiture in addition to Untapable. As a result, his 2015 stud fee at Gainesway Farm has increased to a fortune of $300,000.

Untapable also has quite an impressive female line to back up her performances on the track. Her dam Fun House ran best at age five when she won the Buena Vista Handicap (GII) and placed in the Santa Ana Handicap (GII), both respectable turf races. As a broodmare, she has had even more success. In addition to her champion daughter, Fun House foaled Paddy O’Prado, a multiple graded stakes winner on the turf who also ran well enough on the dirt to finish third in the Kentucky Derby. Untapable certainly inherited her mother’s slender neck, and the success of that filly has convinced Winchell Thoroughbreds to breed Fun House to Tapit each year since 2010.

Untapable’s second-dam Bistra was not quite as successful on the track as Fun House, but she did boast of a record of 7-3-0-3. As a broodmare she was far more successful, producing the multiple graded stakes-winning sprinter Early Flyer by Gilded Time and several runners who earned upwards of $100,000. Third-dam Carols Christmas also had a solid record of 12-4-3-0, but her value as a broodmare soared far above her racing record. Of eight runners, she produced eight winners, three of which were stakes winners. Olympio was by far her best offspring, winning the Arkansas Derby (GI), American Derby (GII), and Malibu Stakes (GII) over dirt and the Hollywood Derby (GI) on turf with victories ranging from distances of seven furlongs to 1-1/4 miles. She also produced Call Now, a graded stakes-winning filly as a juvenile. Daughters of Carols Christmas appear in the pedigrees of recent good runners Pyro and Tapizar, indicating that the Tapit line is quite conducive with tail-female mares of that line due to Pyro’s sire (Pulpit) being Tapit’s sire and Tapizar being a son of Tapit himself. Carols Christmas’s daughter Christmas Star was probably her most successful heir as the dam of good runners and sires Cuvee and Will He Shine.

The damsire of Untapable is Prized, a multiple graded stakes winner on both turf and dirt at ages three and four. As a winner from a mile to one-and-a-half miles, Prized certainly serves as an extra source of stamina for Untapable. Prized was the sire of 38 stakes-winners before being retired to Old Friends in 2010, and sadly, he died in July of last year.

With a current win record of 8 triumphs in 11 total starts, Untapable certainly seems poised to add the Azeri Stakes to her précis. She has been working regularly at Fair Grounds, most recently running five furlongs in 1:01.00 on March 8, the fourth fastest of 53 works at the distance. She arrived at Oaklawn Park on Monday, and, should things go her way, she will be knocking on victory’s door on Saturday.

The 2015 Rebel Stakes is a Springboard for Future Stars 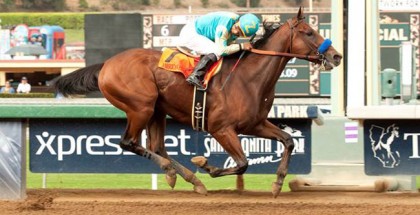