Race Day and Todd Pletcher Hold Edge Over Tapiture in Razorback at Oaklawn: Two races prior to the featured Rebel on Saturday, the Grade 3 Razorback for older horses features an interesting group of well-known competitors including Tapiture and Ride On Curlin. The race also features a horse rising in the stakes ranks named Race Day who is trained by the familiar Todd Pletcher. 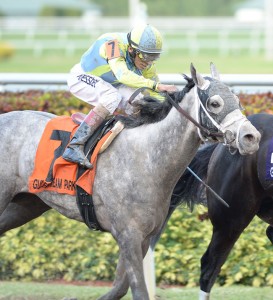 All signs point to a successful invasion by Todd Pletcher once again at Oaklawn with 4-year-old colt Race Day in the 2015 Razorback Stakes. Photo: Coglianese

Owner Matthew Schera did not pay a small price for Race Day. The son of Tapit sold for $285k at the Keeneland November Sale after previously competing in four races. He won two of those initial four starts, including a maiden win at Keeneland and an allowance victory at Churchill Downs.

Race Day ran well against stakes quality horses after the sale. He won an optional claiming race by over eight lengths in December at Gulfstream Park against future Florida Sunshine Millions Classic winner Sr. Quisqueyano. His next race in the G3 Fred Hooper ended up being tougher as Race Day lost by a slim margin to Valid. Valid then ran extremely well in the recent Grade 2 Gulfstream Park Handicap against the elite duo of Honor Code and Private Zone.

Using Race Day on top is the best idea. Despite being a Pletcher-trained horse ridden by John Velazquez, Tapiture and Ride On Curlin should attract more attention as former Derby contenders.

If Race Day wins, no one can call the field weak for this level. Tapiture just finished second in the Breeders’ Cup Dirt Mile last November. He chased Goldencents through an opening half-mile split in 44-4/5 seconds, an unbelievable fraction for a one-mile race. Although a step below the best horses, he previously managed to win a couple of graded stakes races and fits as a contender here. The familiar pair of rider Ricardo Santana, Jr., and trainer Steve Asmussen team up again.

Ride On Curlin breaks from the outside, but with a field of only seven horses, maybe the outside does not hurt in this two-turn route. He finished second in the ungraded Essex at Oaklawn last month while hanging just slightly against the Pletcher-trained Golden Lad. His overall willingness to win is in question with only three wins overall and none of them coming in stakes races or route distances. But, in six starts at Oaklawn, Ride On Curlin has not yet failed to hit the board. Maybe he’ll put everything together now.

Trainer Bob Baffert sends out Midnight Hawk in this race in addition to American Pharoah in the Rebel. Victor Espinoza takes the call for the third straight time on this horse. A former Derby hopeful until they realized his distance limitations, Midnight Hawk won a one-mile optional claimer at Santa Anita in his last start. With some improvement, a top three finish is possible.

The unpredictable Golden Ticket makes an appearance as well. When Golden Ticket fires, he tends to run big. His misfires tend to get ugly, though, as he lost by over 15 lengths in two races last year.

Race Day may never end up at decent value on the board for the rest of his career. All signs point to a successful invasion by Todd Pletcher once again at Oaklawn. If Race Day fails, then expect either another stakes win for Tapiture or the first one for Ride On Curlin. For trifecta players, throw in Midnight Hawk and Golden Ticket just in case.