Dubai Sky Has Chance Against Metaboss in 2015 Spiral Stakes at Turfway: Two streaks depend on the promising Dubai Sky in the Grade II Spiral Stakes at Turfway Park on Saturday. For the past five Spiral editions, the winners made their most recent starts at Gulfstream Park, and Dubai Sky aims to keep that streak alive after recently winning the one-mile Kitten’s Joy at Gulfstream. In addition, he could win his fourth straight race this weekend and keep his personal streak going. 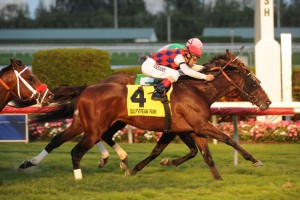 For the past five Spiral editions, the winner made their most recent start at Gulfstream Park, and Dubai Sky aims to keep that streak alive as he recently won the one mile Kitten’s Joy at Gulfstream. Photo: Natalie, Fawkes, Coglianese

A full sibling to the excellent Twirling Candy, Dubai Sky is trained by the familiar Bill Mott and owned jointly by Three Chimneys Farm and Besilu Stables. With his pedigree and those connections, Dubai Sky possesses all the right tools to become a top horse. The well-bred colt simply needs to keep progressing.

Before his win in the Kitten’s Joy, Dubai Sky dead-heated with stablemate Hard to Port in a Gulfstream optional claiming race back in December. Prior to his dead heat with Hard to Port, he broke his maiden in wire-to-wire fashion at Belmont Park on the inner turf. His only loss came at Saratoga last summer, and most handicappers forgive a horse’s first career start.

Except for his maiden loss, Dubai Sky flashed speed in his races, and the style should suit Turfway Park’s polytrack just fine. His early foot might help him clear from the far outside post as well. With most of the attention possibly going to Metaboss, Dubai Sky is the right value choice for the win slot.

Overcoming rising star Metaboss to keep the two streaks alive will not be an easy task. The son of Street Boss, trained by Jeff Bonde, just won the nine-furlong G3 El Camino Real Derby in impressive style. He closed from behind while overcoming a pace that went in :25.29 for the opening quarter and :49.25 after a half. Upon closer inspection, though, running the half in 49 seconds for a nine-furlong race on Golden Gate Field’s Tapeta surface is fairly swift.

Regardless, his turn of foot looks like a visual masterpiece. In the race before the El Camino, Metaboss broke his maiden in another nine-furlong race at Santa Anita on turf with a burst of speed at the right moment. Considering Metaboss’s record and experience at nine furlongs, bettors cannot ignore this colt completely. His late burst failed to materialize three starts back at Del Mar in a maiden special weight at a shorter distance, but any horse that finishes second to Bolo is forgiven. Expect veteran jockey Alex Solis to rate Metaboss early from the second widest post and make a strong late run.

If searching for a jockey angle, Hall of Fame rider Mike Smith chooses Conquest Typhoon after previously riding fellow Spiral contender Imperia at Fair Grounds. Conquest Typhoon ran in the El Camino Real along with Metaboss and faded slightly to third after contesting the pace and making a bold move on the far turn. With a slightly easier tempo up front, Conquest Typhoon could contend for the win spot. Even though Smith moved too early in the El Camino, his experience as a jockey still gives any horse an extra edge. From the ninth slot, Smith will likely press the inside-positioned Royal Son early.

Lastly, the Fair Grounds invader Wireless Future brings his own winning streak into the Spiral with two of his three wins coming on turf. His trainer Tom Amoss and jockey Florent Geroux are both familiar names. From a running style standpoint, this Scat Daddy colt displayed both speed and the ability to pass horses in the past. Plenty of options await his middle post position.

No one doubts the talent of Metaboss. Nevertheless, Dubai Sky deserves an extra look from handicappers, and using both in horizontal wagers is a good idea. For vertical bets, key Dubai Sky and Metaboss over Conquest Typhoon and Wireless Future. 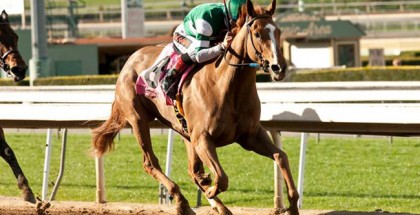