Home » News » The Florida Derby: Making Champions since 1952
No Comments

The Florida Derby: Making Champions since 1952 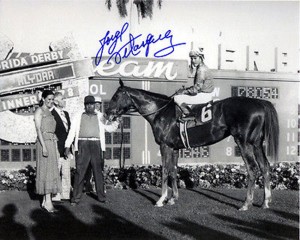 In 1978, Alydar won the Florida Derby before running into his rival, Affirmed, in all three legs of the Triple Crown.
Photo: Ebay

In 1955, Nashua won the Florida Derby on his way to a shocking second-place finish in the Kentucky Derby won by California invader Swaps. Nashua went on to win the Preakness and the Belmont Stakes in addition to many more stakes races. Upon his retirement, Nashua had been honored with Eclipse Awards for Champion Two-Year-Old and Three-Year-Old of 1954 and 1955. He was also 1955 Horse of the Year. Nashua was inducted into the Racing Hall of Fame in 1965. Sportswriter Bill Christine wrote that Nashua “belongs on that short list of the best horses never to have won the Kentucky Derby.”

In 1958, the Calumet-owned Tim Tam won the Florida Stakes in a series of races that took him to a victory in the Kentucky Derby. He went on to capture the Preakness Stakes as well. Ten years since Calumet’s Citation captured the Triple Crown, Tim Tam was said to have a strong chance to win the Triple Crown. However, in the homestretch of the Belmont Stakes, Tim Tam fractured a sesamoid bone and came home second. This injury ended his career but didn’t stop him from being awarded 1958 Champion Three-Year-Old. In 1985, Tim Tam was inducted into the Racing Hall of Fame.

In 1978, Alydar won the Florida Derby before running into his rival, Affirmed, in all three legs of the Triple Crown. Alydar is still the only horse in history to finish second in all three races. Alydar went on to outperform Affirmed in the breeding shed, siring Kentucky Derby winners Easy Goer and Alysheba. He also sired Strike the Gold, Turkoman, and Criminal Type.

The Florida Derby has not only been a significant preparation race for the Kentucky Derby, but it has also seemed to send horses into championships on the track or in the breeding shed. Unbridled became the only stallion to sire a winner of each Triple Crown race: Grindstone won the 1996 Kentucky Derby, Red Bullet won the 2000 Preakness Stakes, and Empire Maker won the 2003 Belmont Stakes. Empire Maker has had a worthy stallion career and has sired horses such as Royal Delta and Bodemeister.