Materiality Spectacular in Florida Derby Win Over Upstart: After Stanford ran second in the Louisiana Derby at Fair Grounds, the chances of Materiality running huge in Florida went up. The Afleet Alex colt had defeated Stanford by five lengths previously at Gulfstream Park. If Stanford went on to give an accomplished horse such as International Star a fight, then a huge effort from Materiality felt imminent. 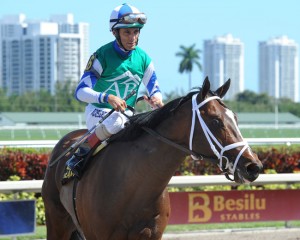 Materiality, pounded down to 9/5 odds, did not disappoint his backers. Originally a 400k purchase by Alto Racing and given to trainer Todd Pletcher, Materiality outdueled betting favorite Upstart in the stretch and won the G1 Florida Derby at Gulfstream Park, winning 100 Kentucky Derby qualifying points in the process.

The race started out with Jack Tripp, Materiality and Upstart breaking well, with Upstart the widest of the three along the first turn. Jack Tripp held a slight advantage through splits of 23.89 seconds for the opening quarter and 48.24 for the half. Materiality began to poke his head in front on the far side, while Jack Tripp fought back briefly.

Once they reached the six furlong point in 1:12.51, the race began to heat up as Materiality and Upstart separated from the field. This scenario resembled the recent Robert B. Lewis at Santa Anita and how the two stars (Dortmund and Firing Line) made their own race.

They reached the mile in 1:38.57, and Materiality bravely kept going on the lead despite a relentless drive from Upstart. Materiality drifted out a little, but he looked like a winner nearing the finish line. Ironically, Upstart was disqualified in the Grade 2 Fountain of Youth for coming out in the stretch, and bettors might notice a double standard with no inquiry sign for this race. Regardless, Materiality put away Upstart and deserved the win. He earned a nine furlong time of 1:52.30.

Ignore the clock for a second. Although fractions and final time remain important study tools, handicappers can use the visual check to determine whether a dirt race was fast. In the majority of fast dirt races, the field is spread thin because good horses tend to “fracture” the field. Over 12 lengths separated Upstart and the third place horse Ami’s Flatter. From Ami’s Flatter to the fourth place horse Itsaknockout, there were seven lengths. Going back further, over 10 lengths came between sixth place finisher Indianaughty and My Point Exactly.

Over the course of the spring, Gulfstream Park has produced some uncharacteristically slow raw times. When Upstart finished first in the Fountain of Youth, many handicappers knocked the slow final quarter and time without considering the slower surface. In another twist of irony, last year the times were fast and many handicappers complained the track was too speedy! Gulfstream only fulfilled the wish for a non-speedy dirt surface.

The point is, raw times are only a good tool when knowing what is “par for the course.” They created the concept of speed figures to fix this problem of not knowing how fast a course played. TimeformUS awarded Materiality a 109 final speed figure.

Fast time or not, Materiality defeated a proven graded stakes winner in Upstart, who ran his best race today, and the Fountain of Youth winner Itsaknockout. In addition, Materiality accomplished this in his third start. Even Upstart’s jockey Jose Ortiz admitted the quality of Materiality in the press release.

“The winner is a good horse too and he proved it,” Ortiz said.

Some critics of Materiality’s chances for the Kentucky Derby may point out the “Apollo Curse.” No horse since Apollo in 1882 won the Derby without racing as a two-year-old. Bodemeister came within a neck of ending this curse in 2012 and most previous rules for picking a Derby winner tend to break at some point. Think about the dosage index rule or the streak of no geldings winning the Derby from 1929 to 2003. Despite the lack of seasoning, Materiality appears headed towards Churchill Downs and fans will find out if this one ends up as Afleet Alex’s first Derby winner.