Danzig Moon Shooting for Stars in 2015 Blue Grass Stakes: While the Blue Grass seems to be one of the strongest prep races for young three-year-olds heading to Louisville, in the last ten years the best finish by a Blue Grass winner in the Kentucky Derby has been a third-place result. Both Peace Rules and Dullahan have achieved third-place finishes in the Derby. However, since 2000, four horses have gone on to win other Grade I races after their Blue Grass wins. Regardless of whether or not this year’s winner is another fantastic horse or simply another surprise, such as Java’s War was in 2013, the Blue Grass is a good prep race for the horses entered. 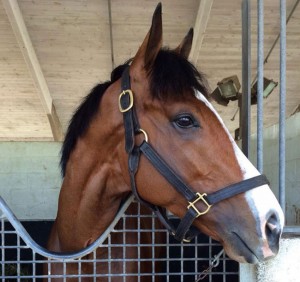 Danzig Moon certainly has a pedigree that should easily get him to the Blue Grass finish line on Saturday and maybe even the Kentucky Derby finish line in May. If Danzig Moon can finish first or second in the Blue Grass, he is guaranteed a spot in Louisville.
Photo: twitter.com/casseracingnc

This year, several horses are being pointed towards the Blue Grass, including a young son of Malibu Moon. Danzig Moon is a lightly raced three-year-old who was last seen in the Tampa Bay Derby where he finished fourth behind a dominant Carpe Diem, whom he will have to face again on Saturday. Danzig Moon will have two prep races under him plus his maiden score in February as his foundation on the First Saturday in May. Since his fourth in the Tampa Bay Derby, he has been eating up the track, recording two very fast works. On March 21, he went five furlongs in :59.5 for the second fastest work of the day at that distance. More recently, he made a four-furlong move on the 27th, covering the distance in :47.6 and stamping his workout as the fastest of twenty recorded works.

As a son of Malibu Moon, a stallion that already has a Kentucky Derby winner to his credit and multiple other graded stakes winners, including Eden’s Moon, Funny Moon, and Life At Ten, Danzig Moon seems to be gifted with a good amount of potential. Malibu Moon may seem to pass along speed, but his offspring can also stretch their speed. Malibu Moon is out of the Mr. Prospector mare Macoumba and is sired by the legendary A.P. Indy. Malibu Moon raced only twice before being forced to retire when he was struck with an injury. Aside from Danzig Moon, Malibu Moon has several nice colts this year in Mr. Z and Stanford.

Danzig Moon’s female line is very promising. While his dam, Leavemeninthedust (Danzig), was unplaced in three career starts, she was sired by dominant sire Danzig. Danzig Moon’s second-dam Hidden Reserve was Grade II and III-placed and was a four-time winner from six furlongs to a mile. The colt’s third-dam was a four-time winner out of five career starts. Pure Profit was a daughter of quality racehorse and stallion Key to the Mint, who ran against Riva Ridge multiple times in his career.

Danzig Moon’s damsire Danzig was an undefeated colt in three starts before knee problems caused him to retire. He sired 188 graded stakes winners and 10 champions, and his sons and daughters have won purse money that exceeds $100 million. Danzig was the sire of 1986 Belmont winner Danzig Connection and 1992 Preakness winner Pine Bluff. He also sired Canadian Hall of Fame inductee Langfuhr, who in turn sired Canadian Triple Crown winner Wando. Danzig also sired Danehill, a stallion most popular across the pond in England and Ireland. Danehill is the only stallion in history to sire 300 stakes winners. Danzig is the damsire of Fusaichi Pegasus and the grandsire of Big Brown. Danzig also sired Breeders’ Cup winners Chief’s Crown, Lure, Dance Smartly, and War Chant.

Danzig Moon has the speed from Malibu Moon and the stamina from Danzig to compete with the best in this year’s Triple Crown train which includes the Blue Grass Stakes at Keeneland as his final prep. If the colt can finish first or second, he will be guaranteed to continue on to Louisville. While he holds no points as of yet, the colt could quickly appear on the board and even possibly jump onto a top ten list. The $160,000 yearling has grown and is now a classy young colt. Could he be the next Blue Grass Stakes winner? What about the 141st Kentucky Derby winner? 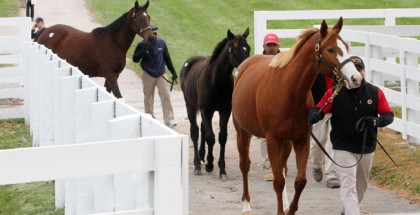 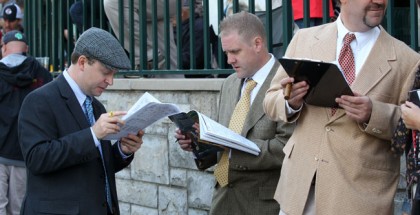