Madison Stakes – Grade I – 7 Furlongs – Four-Year-Olds and Up Fillies and Mares – Keeneland
Princess Violet (Officer – Lady Rapper, Grand Slam) achieved not only her first graded stakes victory a Grade I win in Keeneland’s Madison Stakes. The four-year-old bay filly is familiar with success at the allowance level and found the finish line first in the Empire Distaff Handicap, but in her last two starts she finished second in both the Go for Wand Handicap (GIII) and Barbara Fritchie Handicap (GII). In the seven-furlong Madison, Princess Violet broke from the sixth post position in the field of six and was content to run in fifth on the outside before jockey Junior Alvarado guided her to the rail. The filly made a quick sneak up the rail before moving off into the two-lane and holding off a challenge from Stopchargingmaria on her way to a half-length victory in the good time of 1:22.73.
Madison Stakes 2015 Replay:

Commonwealth Stakes – Grade III – 7 Furlongs – Four-Year-Olds and Up – Keeneland
Kobe’s Back (Flatter – Well, by Well Decorated) finally made it back to the winners circle after a gutsy win in the Commonwealth Stakes. The four-year-old gray or roan son of Flatter has not found victory since his three-year-old win in the San Vicente Stakes (GII). Kobe’s Back had a hard-fought loss in the March San Carlos Stakes (GII) to winner Wild Dude, but he was expected to do well in the Commonwealth with bettors making him the co-favorite at odds of 5/2. At the start of the race, the colt lingered behind the leaders by seven lengths after a bad break, but under Gary Steven the gray quickly picked off horses on his way to a half-length victory over co-favorite C. Zee in a time of 1:22.16.
Commonwealth Stakes 2015 Replay:

Gazelle Stakes – Grade II – 1-1/8 Miles – Three-Year-Old Fillies – Aqueduct
The New York-raced filly Condo Commando (Tiz Wonderful – Yearly Report, by General Quarters) remained on top yet again in the Aqueduct’s Gazelle Stakes (GII). The three-year-old dark bay filly has won four of her five lifetime starts, including the important Kentucky Oaks prep races of the Busher Stakes, the Demoiselle Stakes (GII), and the Spinaway Stakes (GI) as a juvenile. Condo Commando showed speed early in taking the lead with the highly rated Puca running close to her. Jockey Joel Rosario skillfully wrangled back his quick mount to save her speed before allowing her to run at her own pace down the stretch, and in the process she ran away to a commanding three-length win over Puca.
Gazelle Stakes 2015 Replay:

Shakertown Stakes – Grade III Turf – 5-1/2 Furlongs – Four-Year-Olds and Up – Keeneland
In the only race remaining on the turf at Keeneland after a downpour on yesterday’s opening day, Something Extra (Indian Charlie – Our Mariah, by Mt. Livermore) took the Shakertown Stakes (GIII). The seven-year-old dark bay gelding has been chasing a victory in this race for the past three editions, last year coming in third and the year before finishing in second. However, the son of Indian Charlie certainly met success in the meantime as a multiple graded stakes winner. The experienced gelding set the pace along the rail and stayed at the front while opening a multiple-length lead over the rest of the field. Longshot Channel Marker was in hot pursuit late, but Something Extra held on to get the win by half a length for trainer and co-owner Gail Cox.
Replay Updated Upon Release.

Bay Shore Stakes – Grade III – 7 Furlongs – Three-Year-Olds – Aqueduct
March (Blame – Lifeinthefastlane, by Unbridled’s Song) seemed to come from out of nowhere to win the Bay Shore Stakes by a half-length over Lord Nelson. The dark bay colt’s sole other victory was in his maiden, and he ran fifth in the Withers Stakes (GIII) before trying this race. March was content to travel wide at the back of the pack, but with five-sixteenths of a mile left to run, he kicked himself into gear under Irad Ortiz, Jr., on his way to a half-length victory over fellow late charger Lord Nelson. There was a lengthy inquiry following the race, but the order of finish remained unchanged, allowing March to keep his first graded stakes victory.
Bay Shore Stakes 2015 Replay:

Ashland Stakes – Grade I – 1-1/16 Miles – Three-Year-Old Fillies – Keeneland
Ashland Stakes (GI) winner Lovely Maria (Majesticperfection – Thundercup, by Thunder Gulch) added to Larry Jones’s strong hand of fillies prepped for the Kentucky Oaks stakes. Lovely Maria last finished second to stablemate and highly touted I’m a Chatterbox in the Rachel Alexandra Stakes (GIII), but she proved that she was also a true Oaks contender today. The bay filly tracked the pace on the outside in the five-path before moving a little bit to her inside to make her bid. She hooked up with Angela Renee in the stretch, but that rival could not keep up with Lovely Maria as she ran off to a three-and-a-quarter-length win in the Ashland.
Ashland Stakes 2015 Replay:

Wood Memorial Stakes – Grade I – 1-1/8 Miles – Three-Year-Olds – Aqueduct
A gray won the Wood Memorial, but it wasn’t the expected El Kabeir. Frosted (Tapit – Fast Cookie, by Deputy Minister) rebounded to take the prestigious Wood as his final Derby prep after a disappointing and mildly confusing fourth-place finish in the Fountain of Youth Stakes (GII). Frosted ran on the outside in sixth for the beginning part of the race, and after three-quarters of a mile he initiated his forward advance. The gray colt moved up on the outside without urging to bypass longshot Tencendur and win by two lengths, and Godolphin Stables and Kiaran McLaughlin are now able to claim a Kentucky Derby contender after his solid victory.
Replay Updated Upon Release.

Blue Grass Stakes – Grade I – 1-1/8 Miles- Three-Year-Olds – Keeneland
The heavily favored Carpe Diem (Giant’s Causeway – Rebridled Dreams, by Unbridled’s Song) ran away with today’s Blue Grass Stakes before planning to travel to Churchill Downs to prep for a start in the Kentucky Derby. The blazed chestnut colt was most recently seen taking an easy victory in the Tampa Bay Derby (GII), and he has certainly turned into the most promising Derby prospect for Todd Pletcher. The speedy Ocho Ocho Ocho claimed the lead at the beginning while Carpe Diem tracked him on the outside. Ocho Ocho Ocho fell back to finish third, but Carpe Diem extended himself to win by three lengths over Danzig Moon.
Toyota Blue Grass Stakes 2015 Replay:

Carter Handicap – Grade I – 7 Furlongs – Four-Year-Olds and Up – Aqueduct
With well-acquainted rival Salutos Amigos in the process of rewinding from a vaunt to Dubai, Dads Caps (Discreet Cat – Seeking the Silver, by Grindstone) was finally able to get his own triumph in stakes company. The five-year-old horse has continually been consistent in graded sprints races, never running worse than fifth in his 18 lifetime starts but running second to Salutos Amigos in his past two outings. He won last year’s edition of the Carter Handicap (GI) for his first graded stakes victory, so he’s now a dual winner of the classic. Dads Caps easily tracked the pacesetters on the inside before being bumped by Palace. Having recovered from that setback, the horse resumed his advance and inched away to win by a solid 1-1/2 lengths.
Carter Handicap 2015 Replay:

Santa Anita Oaks – Grade I – 1-1/16 Miles – Three-Year-Old Fillies – Santa Anita
While some racing enthusiasts thought Stellar Wind (Curlin – Evening Star, by Malibu Moon) was just a passing breeze, the filly proved them wrong in taking the Santa Anita Oaks. The chestnut filly, a near replica of her sire, was last seen taking her first graded stakes race in the Santa Ysabel Stakes (GIII) in an attempt to judge her Kentucky Oaks potential. Deemed to be quite promising, Stellar Wind was set to run here in the Oaks, and as the heavy favorite, she did not disappoint. The filly broke a bit slowly and ran at the back of the pack, but she got into gear around the backstretch and quickly ran by her opposition on her way to a 5-1/4-length victory over Luminance.
Santa Anita Oaks 2015 Replay:

Fantasy Stakes – Grade III – 1-1/16 Miles – Three-Year-Old Fillies – Oaklawn
A longshot claimed Oaklawn’s feature race of the Fantasy Stakes (GIII) today. Include Betty (Include – Betty’s Solutions, by Eltish) took her time in breaking her maiden, but after doing so she won the Suncoast Stakes. She then attempted graded stakes company in the Grade III Florida Oaks, but she was only able to manage a fifth-place finish in that race. It was obvious her spirits were not dampened as she gamely took the Fantasy by a neck over the much more favored Oceanwave. Include Betty was easily outrun in the early going of the race, but she overcame her slow early performance, an eight-wide run, and an inquiry for drifting out to claim her first graded stakes victory.
Replay Updated Upon Release.

Santa Anita Derby – Grade I – 1-1/8 Miles – Three-Year-Olds – Santa Anita
In yet another feat of dominance in the Grade I Santa Anita Derby, Dortmund (Big Brown – Our Josephina, by Tale of the Cat) once again demonstrated why he is considered to be one of the most highly rated three-year-old colts of the year, if not the most promising colt. The massive chestnut colt has proven his heart and versatility in his past victories, most recently claiming the San Felipe Stakes (GII) over the same Santa Anita track. In the renowned prep of the Santa Anita Derby, Dortmund broke a bit badly but was still able to claim the early lead while being tracked by longshot Cross the Line and the versatile Bolo. The big red colt would not be denied, and under some urging by Martin Garcia he finished an easy 4-1/4 lengths ahead of stablemate One Lucky Dane and Bolo.
Santa Anita Derby 2015 Replay: 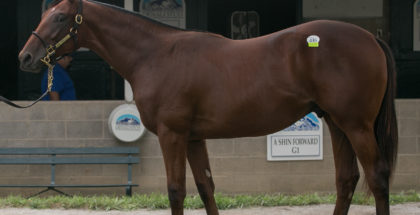 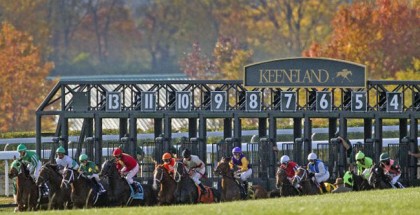 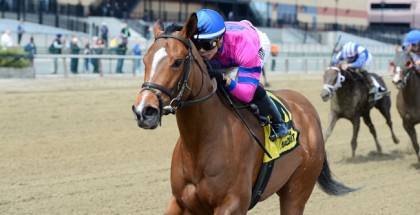