Top Ten 2015 Kentucky Derby Contenders: Casey’s Picks- The Kentucky Derby is a month away, and the rankings are heating up. Horses are dropping off some lists while leaping to the tops of others. After a huge weekend of racing that included the Florida Derby, UAE Derby, and the World Cup, the week was calm until the next weekend’s runnings of the Wood Memorial, Bluegrass Stakes, and Santa Anita Derby.

This month’s list is the second to last before the Kentucky Derby will be run, and it is hard to distinguish where a horse should be with all the talent already displayed by all of the horses on this list.

Dortmund (Big Brown – Our Josephina, by Tale of the Cat) – 170 points – After having done nothing wrong his entire career, denying him this top spot is no longer possible. He made his final prep for the Derby in the Santa Anita Derby, and he ran away in that race to a 4-1/4 length victory. His massive size causes him to be a bit less limber than his smaller counterparts. However, his strides are equal to two or three of his rivals’. Baffert has the two superstars of the Kentucky Derby this year. 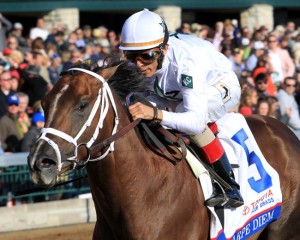 WinStar Farm and Stonestreet Stables’ Carpe Diem took command in upper stretch and cruised to a three-length victory over Danzig Moon in the 91st running of the $1 million Toyota Blue Grass (G1) before a crowd of 26,357 on Saturday, April 4, 2015. Photo: Keeneland

Carpe Diem (Giant’s Causeway – Rebridled Dreams, by Unbridled’s Song) – 164 points – After a phenomenal effort in the Tampa Bay Derby in his 2015 debut, this colt has confirmed why many, including myself, were high on him as a juvenile. This colt finished second in the Breeders’ Cup Juvenile, which is proving to be a key race this year. Carpe Diem headed back to Keeneland, the track where he scored his Grade I win in the Breeders’ Futurity last October, to dominate in the Bluegrass Stakes. This is a huge shot for WinStar, Stonestreet, and Pletcher to get the Derby roses this year.

Firing Line (Line of David – Sister Girl Blues, by Hold for Gold) – 58 points – So far, this is the only colt to give Dortmund a run for his money. When he finally broke away from Dortmund in the Sunland Derby, he toyed with a field and broke a track record in the process. He is now on the shelf until May 2. Can he win the Kentucky Derby with his borderline pedigree and pressing running style? Possibly. He wouldn’t be this high on my list if he couldn’t.

Materiality (Afleet Alex – Wildwood Flower, by Langfuhr) – 100 points – How is an unraced two-year-old third on my list? Watch the Florida Derby and how he remains undefeated over my previous top Derby horse, Upstart. This Todd Pletcher trainee is a perfect three-for-three in his career, but going into the Kentucky Derby on only a three-race foundation is less than ideal. He is going to need to be in top-notch form, both physically and mentally, if he wants to hand Todd Pletcher his second Kentucky Derby win.

International Star (Fusaichi Pegasus – Parlez, by French Deputy) – 171 points – I have been high on this colt since his juvenile season. I love his pedigree, and its blend of speed and stamina intrigues me. He has a win over every surface in North America and has proven that he enjoys the Fair Grounds main track. The question now is if he can take to the Kentucky dirt. I also question if he is a true 1-1/4-mile horse or not. So far, he looks to be, but only Derby Day will tell for sure.

Upstart (Flatter – Party Silks, by Touch Gold) – 76 points – I left him at the top of my list after the Fountain of Youth because I expected him to regress a bit after his monstrous victory in the Holy Bull, but now, after another performance where he couldn’t grab a win, I had to drop him off the top. He’s still probably my favorite three-year-old, but he is no longer my top pick for the Derby. He, on paper, has a good stamina-oriented pedigree, but so far, he has yet to display what I need to see from him.

Mubtaahij (Dubawi – Pennegale, by Pennekamp) – 100 points – This horse has rocketed to the top of many Derby lists following his strong win in the 1-3/16 mile UAE Derby. He has a pedigree that says turf, but the colt definitely enjoys the dirt and has now stamped his ticket to Kentucky. The Sheikh wants a Kentucky Derby win, and this colt looks to be the best shot he’s ever had.

Far Right (Notional – Zindi, by Vindication) – 22 points – This colt has been ruling the preps at Oaklawn Park and is set to take on American Pharoah and others in the Arkansas Derby. If he can defeat American Pharoah in the Arkansas Derby, he should be a good price on Derby day. I’m unsure of what makes him so good, and his pedigree doesn’t seem to be the best for distance. However, this colt seems to run increasingly well as more distance is given to him. 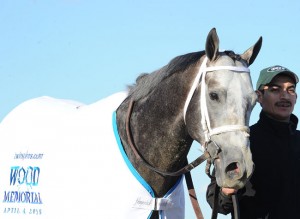 Trainer Kiaran McLaughlin’s Frosted overcame a wide trip and a host of doubts to run down long shot Tencendur and take the Grade 1, $1 million Twinspires.com Wood Memorial on Saturday at Aqueduct Racetrack. The victory officially punches the 3-year-old colt’s ticket to the Kentucky Derby on May 2. Photo: Adam Mooshian, Coglianese/NYRA

Frosted (Tapit – Fast Cookie, by Deputy Minister) – 113 points – This colt has finally figured out his issues and soundly defeated El Kabeir in the easiest field El Kabeir has faced. Thus, this colt has finally made his way onto my list. We all know that I am not the biggest fan of Tapit offspring in the classics, but this colt seems to be a different type of Tapit, much like Tonalist was a different type of Tapit. He was obviously able to beat a good field here, but can he duplicate that form in Kentucky? In only a few weeks, we will find out.

Danzig Moon (Malibu Moon – Leavemeinthedust, by Danzig) – 45 points – This colt faced a tall task when asked to take on the strong Pletcher horse, Carpe Diem, in the Blue Grass at Keeneland, and he ran a great race to finish second to that colt. While I think Danzig Moon still has a lot of growing up to do for trainer Mark Casse, this colt has a lot of potential to be a big threat this year, and I couldn’t leave him off of here. While he is pretty small, he is a strong, very correct, well put together horse. He has endless potential!

American Pharoah (Pioneerof the Nile – Littlprincessemma, by Yankee Gentleman) – 60 points – This young colt is hoping to win the Kentucky Derby off only two prep races. The 2014 Champion Juvenile Male needs to show up in the Arkansas Derby and answer more distance questions before I can move him above anyone on this list. Yes, horses occasionally outrun their pedigrees, but stamina normally comes from the dam’s side, and his distaff pedigree is severely lacking in class and stamina. I don’t see this one as a true Derby horse, but right now, he’s a contender.

Looking Through the Lens on Blue Grass Day 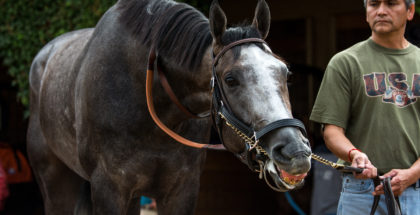 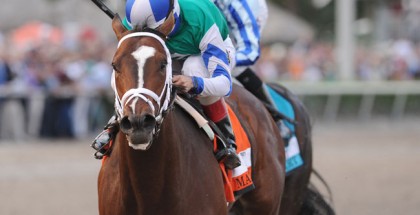 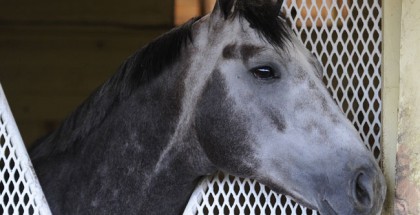 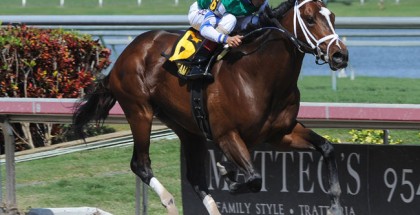