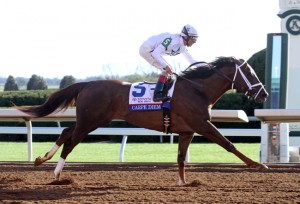 WinStar Farm and Stonestreet Stables’ Carpe Diem took command in upper stretch and cruised to a three-length victory over Danzig Moon in the 91st running of the $1 million Toyota Blue Grass (G1) before a crowd of 26,357 on Saturday, May 4, 2015. Photo: Keeneland

Carpe Diem, a 2012 colt bred by Coffee Pot Stables, has nearly earned back his purchase price of $1.6 million at the Ocala Breeders’ Sales Company 2014 Selected Sale of Two-Year-Olds in Training in Florida. The colt was the top priced horse of the entire sale and has since gone on to win all but one of his five career races. His only non-winning effort was a second-place finish in the 2014 Breeders’ Cup Juvenile where he had to run behind horses for the first time, but he closed enough ground to grab second from Upstart, this year’s winner of the Holy Bull at Gulfstream.

Carpe Diem has a great foundation as he heads into the Kentucky Derby. His experience with two-turn races and ability to win at such distances will prepare him to handle the 1-1/4 mile distance of the Kentucky Derby. His only sprinting start was his maiden score at Saratoga. Since then, he has been routing and doing so effectively.

From a pedigree standpoint, Carpe Diem is bred not only for the Kentucky Derby but for the Preakness and the Belmont as well. His sire Giant’s Causeway was effective in distance races, and his offspring are runners of every type with many of them running as successful turf marathoners. Giant’s Causeway does not have a Kentucky Derby winner to date, but he does have Breeders’ Cup winners and multiple classic winners across the Atlantic in Europe. 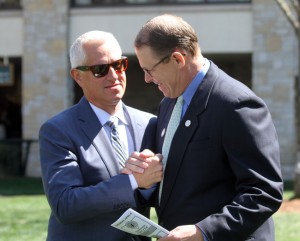 Todd Pletcher, pictured above with WinStar Farm CEO Elliot Walden, stated that Carpe Diem will remain at Keeneland and then ship to Churchill Downs to train before the 141st running of the Kentucky Derby.
Photo: Keeneland

From a pedigree standpoint, Carpe Diem has more than enough class, speed, and stamina to win the Kentucky Derby. He also has the ability to win more than his fair share of graded stakes races. His speed figures have improved throughout his career, with his career best being the 95 Beyer he recorded in his Blue Grass win over Danzig Moon.

Multiple others believe this statement as well. Freelance journalist Laura Pugh agrees and believes that the Blue Grass field was deeper than it looked to the naked eye: “Ocho Ocho Ocho, at his best, is a top-notch horse.”

This statement matches the post-race observation that the Street Sense colt grew tired during the stretch of the Blue Grass. Ocho Ocho Ocho didn’t get anything out of his last start in the San Felipe, so this race was supposed to help him get back on track. Carpe Diem was able to press Ocho Ocho Ocho before pulling away and holding off a good rally by Danzig Moon in the stretch.

According to trainer Todd Pletcher in the post race interview, Carpe Diem will remain at Keeneland and then ship to Churchill to train before the Kentucky Derby. With 161 points, Carpe Diem is guaranteed a spot in the field. The only question now is whether or not he is better than American Pharoah or Dortmund. Pletcher takes on the Baffert duo with his best shot to win a second Kentucky Derby, and from the looks of Carpe Diem, he is certainly a strong contender for the roses and beyond.