Untapable Will Improve in Historic Apple Blossom Handicap at Oaklawn: Those skeptical of Untapable’s chances to redeem herself this weekend might look to 2010, the year trainer Steve Asmussen sent out the great Rachel Alexandra to two consecutive losses after a Horse of the Year season. But, Rachel Alexandra did improve a great deal in her second start, the La Troienne, and the mare that defeated her previously finished 13 lengths behind her. 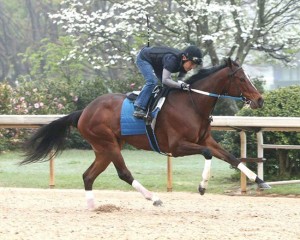 Expect major improvement for Untapable when she makes her second start off the layoff and competes in the Grade I Apple Blossom Handicap at Oaklawn Park on Friday. With a win, she can join great past champions, including Havre de Grace, Zenyatta, Azeri, Paseana and Bayakoa.

Sure, Untapable lost to Gold Medal Dancer in the Grade II Azeri on the same racetrack. Some important factors favored Gold Medal Dancer though, including the lack of pace when Sugar Shock scratched. In dirt racing, an uncontested lead is one of the most powerful trips and results in victory more often than not. Gold Medal Dancer opened up by over A length at the half-mile point, allowing the mare to conserve enough energy to hold off Untapable’s late run. Considering Gold Medal Dancer had things her own way, Untapable arguably ran better despite finishing second.

Untapable, like Rachel Alexandra in the past, also came off a layoff in that loss. Although she started off last year with a win, that was a different situation because she benefited from having raced in December. This year, she entered the season without a race since early November. Now that she has dusted off the cobwebs, Untapable will have the advantage.

As for Gold Medal Dancer, she ran an admirable race in holding off a champion filly to win. In this situation, she faces possible pace pressure from Call Pat and Sugar Shock. In addition, her winning BRIS number for the Azeri was not that much better than her average speed figures. At five years old, her limit has been reached. Expect this speedy mare to finish second or third.

Sugar Shock appeared to be an interesting contender in the Azeri until she scratched. Then, this four-year-old Candy Ride filly threw in a clunker and lost by 17 lengths in the same race Call Pat just won. What happened? Maybe she simply ran an unexplainable race and will rebound here. As a younger horse, overall improvement remains possible. Plus, with only seven horses competing here, the outside post will not pose a huge problem.

Call Pat won nicely in that March 20 optional claimer, making an early move into a fast pace and drawing clear. Two starts ago, she lost by 31 lengths in a race in which Gold Medal Dancer finished third. Which version of Call Pat will show up on Friday? Regardless, her overall class is in question. From the rail position, jockey Ramon Vazquez needs to use her early to secure position.

The only other underneath possibility is Pearl Turn, a five-year-old daughter of Bernardini that originally brought $200,000 at auction. She has hit the board in 9 out of 16 starts, which is somewhat consistent. With her absolute best, maybe she could earn a graded stakes placing here.

A huge amount of money is normally bet to “show” on the star horse when no other popular horses show up, and expect that to happen for Untapable. Those hoping for the unforeseen might try to capitalize and bet to show on one of the other horses. To learn more about this scenario, commonly known as a “bridgejumping” situation by gamblers, check out this Google search link. If Untapable dumps her jockey, the payoffs will blow up. Otherwise, single Untapable in horizontal wagers or just skip the race. The lack of value is not worth the risk.